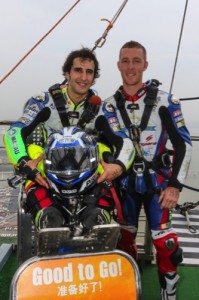 On the sidelines of an event held by  the CF Racing Team 32 at the Macau Tower early yesterday afternoon, MDT spoke to the riders Andre Pires from Portugal and South-African Allann-Jon Venter to get their impressions about Macau, the Grand Prix and their expectations for this year’s race.
Both teammates were rookies in Macau in last year’s race. Pires told the Times how this represents a new challenge for him, saying that everything is different this year. The team and his motorcycle are much more advanced in preparation when compared with the “Stocksport” that he normally races, and on which he just became Portuguese Champion. For all that, his expectations are high and his wish is to improve on his 13th position in last year’s race and to finish in the top 10.
Venter is also happy for this opportunity and for being part of such a good team. As he mentioned, his aim is to do better than last year’s race, where he was involved in a crash right on the first lap at the Lisboa Bend. Even so, he managed to finish in 18th place and he is ready for a better result this year.
The event organized by the CF Racing Team 32, a local team, also opened up the opportunity for some meet-and-greet with the fans that included photos and autographs, and for the riders, an adrenalin boost, with a bungee jump from AJ Hackett Macau Tower, the World’s Highest Bungee.
The Times and Tribuna are the official media partners of the CF Racing Team 32. Renato Marques