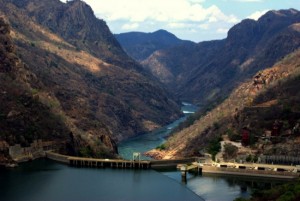 Construction of five new hydroelectric dams in Mozambique and the expansion of the Cahora Bassa facility will increase the potential of the country’s energy production by around 3,600 megawatts, involving investments of over USD7 billion.
Power consumption in Mozambique is increasing by an average annual rate of 82 megawatts (about 14 percent), according to the Ministry of Planning and Development (MPD), and expansion of the energy sector is one of Mozambique’s greatest economic challenges, given the growing industrial requirements across the country.
It is in this context that in the Government 2015-20019 Five-Year Plan, which will be voted by the Mozambican parliament from the beginning of April, the government noted the priority of developing various power generation projects, some of which have already secured investors and funding.
This is the case of the Lupata Hydroelectric Facility, in Tete province, with a potential to generate 416 megawatts, which will require an investment of about US$1.072 billion, implemented by a consortium of companies including Hydroparts Holding and Cazembe Holding, both registered in Mauritius, and state power company EdM and Sonipal of Mozambique.
Also in Tete province and along the Zambezi River, the Boroma Hydroelectric Dam will have an installed capacity of 210 megawatts, and will be carried out by Rutland Holding, of Mauritius, EdM and Sonigal, which will need to invest US$572.5 million in the project.
Added together, the two projects are likely to create more than 4,000 jobs, according to the Mozambique Centre for Investment Promotion, through which the investments were made in 2014.
The guidelines for government policy also give priority to starting construction of the Mphanda Nkuwa dam, about 70 kilometres northeast of the city of Tete and 61 kilometres southeast of the Cahora Bassa dam, a project with a generation potential of 1,500 megawatts, which has an estimated cost of US$4.2 billion.
Already awarded to Camargo Corrêa (40 percent), of Brazil, Insitec (40 percent) of Mozambique, and EdM (20 percent), the dam should be completed in 2017, according to the Integrated Programme of Investments of the MPD, revised in June 2014.
In this document, the MPD also outlined the construction of the Lúrio Hydroelectric Plant in Nampula, citing a generating capacity of 180 megawatts and an investment cost of about US$480 million, but for now, the project has no known investors .
The situation is similar with the Alto Malema Hydroelectric dam, also in Nampula province, with a potential to generate 60 megawatts, which is included in the five-year government programme.
The government has also noted the progress of the second phase of Cahora Bassa (HCB), the project also called Cahora Bassa Norte, construction of which will increase in the power generation capacity of the project by 1,250 megawatts, from 2,075 megawatts at the moment.
The project is estimated to cost about US$700 million, according to estimates from the MPD.
HCB’s shareholder structure includes the Mozambican state with a 92.5 percent stake, while Portuguese power grid company REN, which itself is 25 percent owned by the State Grid Corporation of China (SGCC), owns the remaining share of 7.5 percent.
Mozambique currently has a production capacity of about 2,300 megawatts of power an HCB is the facility that produces the largest amount of electricity in the country.
Much of the dam’s production (about 75 percent) is exported, particularly to Zimbabwe and South Africa, a country whose national power company Eskom, has an agreement with HCB for the annual purchase of 1,100 megawatts, valid until 2029.  MDT/Macauhub