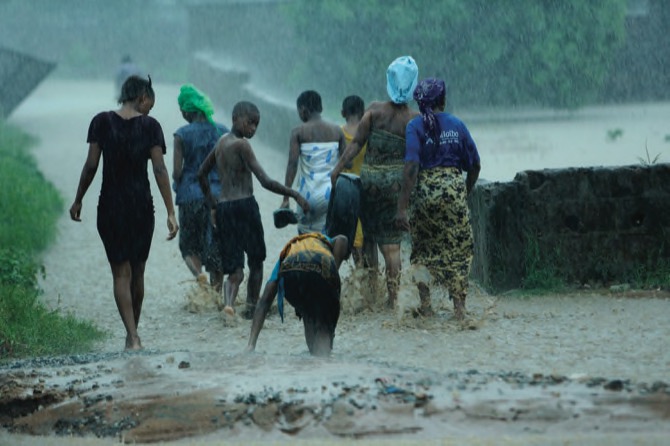 People leave their flooded homes in Natite neighbourhood, in Pemba, on the northeastern coast of Mozambique, yesterday

Serious flooding raged on Sunday in parts of northern Mozambique hit by Cyclone Kenneth three days ago, with water waist-high in places, after the government urged people to immediately seek higher ground. Hundreds of thousands of people were at risk with more rain forecast for days ahead.

“Help us, we are losing everything!” residents in the region’s main city, Pemba, shouted at passing cars as the rushing waters flooded their homes and heavy rain fell. Women and girls with buckets and pots tried to scoop away the torrent, in vain. The water poured into doorways.

Houses began to collapse and a rescue team was mobilized, United Nations staffers said. “We are unfortunately expecting devastating floods,” the U.N. humanitarian agency said in a tweet.

Kenneth arrived just six weeks after Cyclone Idai ripped into central Mozambique and killed more than 600 people with flooding. The new storm’s remnants could dump twice as much rain as Idai, the U.N. World Program has said. As much as 250 millimeters (9 inches), or about a quarter of the average annual rainfall for the region, had been forecast over the next few days.

“I have never seen such rains in my life,” said one Pemba resident, 35-year-old Michael Fernando.

This was the first time in recorded history that the southern African nation has been hit by two cyclones in one season, again raising concerns about climate change.

Some Pemba residents tried to pile up tires and sand-filled sacks as barricades. Children took refuge in a bus that appeared to be stuck as vehicles struggled on the streets. One woman stood, seemingly stunned, as the rain pounded down. Cars began to slip under the waters.

“We will keep moving until we get somewhere safe,” one man said, as people fled carrying belongings in plastic bags.

There was no immediate word of deaths yesterday. Authorities have said at least five people died after Kenneth roared in Thursday evening with the force of a Category 4 hurricane, stunning residents of a region where such a storm had not been recorded in the modern era.

Nearly 700,000 people could be at risk in the largely rural region, many already exposed and hungry. More than 35,000 homes in parts of Mozambique’s northernmost Cabo Delgado were partially or fully destroyed by the storm.

Aid groups wanted for news yesterday from districts beyond Pemba that had been hit much harder by the cyclone. Some of the swelling rivers in the region have burst their banks in the past, notably in 2000.

On Saturday, aerial photos showed several coastal communities flattened by the storm. “Not a single house is standing anymore,” Saviano Abreu, a spokesman with the U.N. humanitarian agency, told reporters.

Livelihoods have been lost and people are wondering how they will cope in a country struggling with one of the world’s highest poverty rates.

With unemployment rife and many in coastal areas surviving with fishing and related activities, not going to sea could mean going hungry for days.

Men, women and children foraged in the waters off the littered shore, looking for seashells to sell. Farai Mutsaka, Pemba, AP