MSAR plays role in rebuilding school in the Philippines 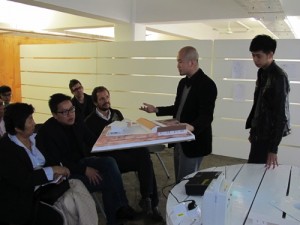 Fifteen months have passed since Typhoon Haiyan swept over the Philippines, yet the many buildings it destroyed are still waiting to be rebuilt, according to Ms Lilybeth Deapera, the newly appointed Philippine Consul General to Macau.
In a design workshop, concluded at the Center for Architecture and Urbanism this week, the diplomat listened to the presentation of different designs,  jointly proposed by local architects and students, for the reconstruction of school buildings.
“I’m really interested to see how this project moves forward, because it will definitely help the people of the island of Capiz. And I’m really interested to know how the students and architects will devise a way by which they can improve the classroom,” she told the Times.
“I was really amazed by the imagination of the students, and I’m really grateful that they volunteered to participate in this project. That means there’s really an interest, and interest is not something that you can force,” she said.
The two-day workshop gathered fifteen students from the University of Saint Joseph (USJ) and local high schools. They collaborated with several USJ faculties and architects from the Architecture Sans Frontieres Macau (ASF-M) to explore different ideas for a two-classroom building reconstruction plan.
“The best ideas don’t always come from the most mature professionals, sometimes children or people without specific knowledge may suggest interesting ideas,” explained Diogo Teixeira, senior lecture at USJ and a coordinator of the project.
The building is part of a school that serves 186 kindergarten and elementary students located in the Punta Cogon barangay of the Philippines’ Capiz Island. Architects expect that it will be reconstructed with the best solution and enough funds from the support of the Macau community.
“Ideally we would like to start construction in May. This is actually a fast process, so the idea will be to probably open for the next school year in the Philippines that’s starting in June or July,” said Mr Teixeira.
The workshop was aimed at improving the quality of design of the school building upon the standard design that’s issued by the Philippine government.
“Sometimes the standard design of a project is much concerned with economy and functionality, but people also need other elements, sometimes just a small detail can [make a difference],” he said.
The other objective, according to the coordinator, was to “integrate ethical and social values in architecture.”
“That’s not something that can be added later, but must be part of the design process. We think it’s important for our students to be ethically and socially concerned,” he stressed, “and it’s important to learn by doing. The challenge of having a real world problem to solve is much more interesting and motivating for the students; while in comparison an academic exercise will never be built.”
Architectural shape, efficiency and comfort, and the idea of playfulness were respectively emphasized in the workshop presentations. Suggestions for adding in playful elements such as crawling pipelines and climbing walls also drew the audience’s attention.
“They are very imaginative, creative. But I’m more on the practical side, so I hope they will be able to combine the playfulness with the practical side like water, entrapment and safety,” she told the Times. “All the questions could be addressed properly. I hope they will be able to build it.”
The reconstruction project was initially proposed by a group of Christians in Macau when they saw what was happening in the Philippines after the typhoon in November 2013. Churches, hospitals and schools were among the most in need of reconstruction.
“We are part of the group and we decided that we had to do something, we cannot just cross arms and stay here waiting for someone else to do it,” said Mr Teixeira. “We decided to focus on schools because that’s more related with the future of the younger generation.”
“We think it will reach more of the population and more communities, since schools are the base of all development of a country,” added Sergio Spencer, an architect from the non-profit organization ASF-M. According to Spencer, the cost for the reconstruction plan is estimated to be between MOP400,000 and MOP500,000. As a next step, some fundraising activities may be put on the agenda.
Reconstruction of the chosen school is regarded as a pilot project, said Mr Spencer, as they intend to extend support to other schools, and “eventually to other countries.”
“It’s also for promoting competence for people in Macau to provide humanitarian aid,” he added, “because usually Macau is generous – but just sending the money for other parties to take the action.”