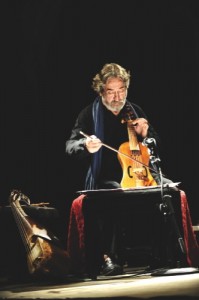 Iconic musician Jordi Savall will play at the Macau Cultural Centre (CCM) on November 29 (Saturday). He will come to town accompanied by early music ensemble Hespèrion XXI to be part of a concert that will be included in CCM’s 15th anniversary programs.
Distinguished as UNESCO’s “Artist for Peace” and winner of a Grammy award, the Catalan gambist, conductor, scholar and record producer is seen as the most important icon of early music worldwide. He worked with director Alain Corneau in the 1991 French film “Tous les Matins du Monde,” which granted this viol specialist international recognition and a Cesar Award.
Creator of a unique style, Jordi Savall has been devoted to the rediscovery of forgotten musical treasures for more than 40 years. In 1974, he co-founded Hespèrion XX (known as Hespèrion XXI since 2000), a group that has played numerous concerts in Europe and America and is a regular guest at major music festivals all over the world. Savall has dedicated himself to the study and interpretation of ancient music and is a prolific virtuoso. He performs 140 concerts yearly and has recorded over 200 CDs.
According to a press release issued by CCM, the November concert is titled “Mediterranean musical voyage.” The concert’s track list includes tunes from countries with rich traditions, such as Italy and France, but also from mysterious and diverse landscapes, such as Morocco, Israel and Turkey.
The concert will be preceded by a free admission talk by Chow Fan Fu one hour prior to the performance. The session will take place at CCM’s Conference Room, and the music critic will share insightful views on Savall’s background and repertoire.
Tickets at various prices and discounts will be available at CCM’s box office and Macau Ticketing Network outlets from September 21, 2014 (Sunday).