Napoleon the center of Bastille Day celebration this year 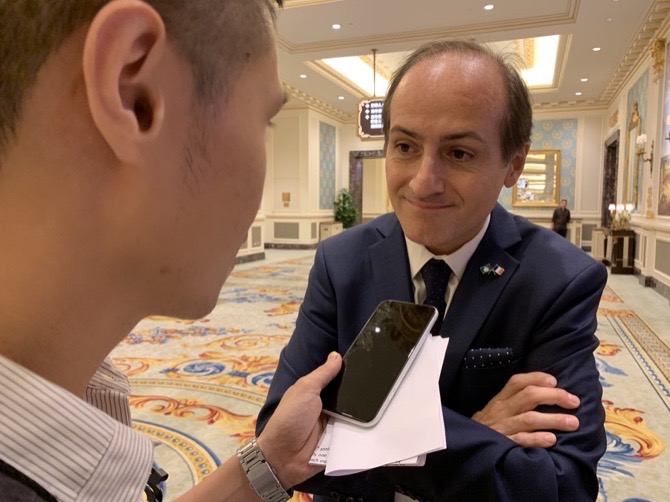 The Consul-General of France in Hong Kong and Macau, Alexandre Giorgini, made a dedicated reference to Napoleon Bonaparte in his speech at an event held yesterday to celebrate the country’s national day.

The French National Day (commonly referred to as Bastille Day) in Macau was celebrated yesterday at The Parisian Macao integrated resort. The Consulate General of France in Hong Kong and Macau, the France- Macau Chamber of Commerce, the Alliance Française de Macau (AF) and the resort organized a cocktail reception and dinner.

The consul started his speech by expressing his appreciation to all guests of honor and supporting entities for realizing the event. He also expressed his adoration of the replica of the famous Eiffel Tower, a Parisian icon which stands by the hotel’s porte cochere.

Giorgini further introduced that this year marks the 250th anniversary of Napoleon’s birth. Making use of the occasion, he invited guests at the cocktail reception to visit France, particularly the emperor’s residences near Paris and the castles of Fontainebleau and Malmaison.

Artworks owned by Napoleon, as well as his iconic hat, the bicorne, were on display last night as part of the celebration.

In an interview with the Times, Giorgini disclosed that he is regularly in Macau for both work and leisure. He thought that Macau is not only a city of tourism, but also a cultural one.

In terms of cultural collaboration between China, France and Macau SAR, the consul said, “Macau received more than 35 million visitors last year, there is a huge opportunity for us to promote our culture to Macau and people from other parts of the world. We have a lot to do in the promotion of culture, food and history.”

Moving ahead, he noted that his country is the third biggest supplier of goods to Macau. Last year, France exported about one-third more in goods to Macau than in the previous year. The main imports from France include luxury items as well as food and beverage products.

However, “bringing the best of France to Macau” still remains a challenge.

“French restaurants in Macau are exceptional, making it challenging for my team to attract companies in France to export their goods to Macau,” admitted Giorgini.

Three of the best French chefs in the world, namely Alain Ducasse, Pierre Hermé and the late Joël Robuchon have or operate dining business in Macau. The latter has obtained the Michelin Guide’s prominent 3-star award for 11 straight years. Staff reporter