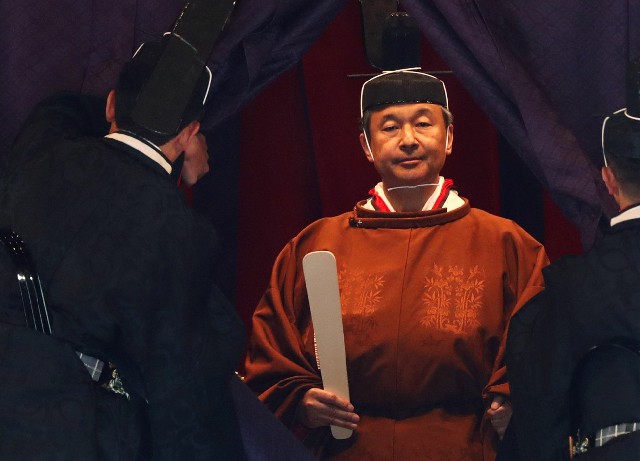 Japan completed the months-long coronation of Emperor Naruhito in an elaborate ceremony in Tokyo, as assembled global royalty and political leaders looked on.
Clad in layers of intricately patterned silk, Naruhito and his consort, Empress Masako, assumed their seats in a ritual at the Imperial Palace in central Tokyo yesterday. The emperor and Prime Minister Shinzo Abe both gave speeches at the formalities, at which about 180 countries were represented.
“I shall always wish the happiness of the people and the peace of the world, and stay together with the people while acting according to the Constitution and fulfilling my responsibility as the symbol of the state,” the emperor said in a speech during the ceremonies after emerging from behind a purple curtain.
“We will make our utmost efforts to create a peaceful and brilliant future full of hope for a proud Japan,” Abe said in a speech. He then bowed and shouted “Banzai” three times, using a traditional Japanese cry pledging a long life. His comments were followed by a canon salute that reverberated around the palace.
The ceremony, steeped in centuries of tradition, includes the presentation of the sacred sword and jewel that are part of the imperial regalia, which has been passed through generations of monarchs who have ascended the Chrysanthemum Throne. A parade through the capital in an open-topped limousine set for yesterday has been put off until Nov. 10 out of respect for the victims of a typhoon earlier in October, which has killed at least 78 people and caused billions of dollars in damage.
Naruhito and Masako hosted the first in a series of formal banquets at the palace yesterday, where traditional court music and dance will be performed. Abe will also host a banquet at a hotel the following day.
Naruhito, 59, is by the Imperial Household Agency’s count, Japan’s 126th emperor. His grandfather Hirohito, was the last emperor designated by tradition to be a living god. After Japan’s defeat in 1945, the U.S. kept Hirohito on the throne to build unity, but made the position of emperor one for a mortal who had no say in state policy.
Royalty, such as Britain’s Prince Charles, are among those in Tokyo for the festivities. Unlike some royal households in other parts of the world, Japan’s postwar imperial family has mostly dodged major scandals.
Naruhito inherited the throne after his father, Akihito, became the first Japanese emperor in two centuries to abdicate, citing poor health. A new emperor means a new era in the Japanese calendar, so 2019 has also been dubbed the first year of Reiwa, which the government translates as “beautiful harmony.” Akihito reigned from 1989 for three decades.
Naruhito was the first Emperor to be educated in the West, spending two years at the University of Oxford. One of the imperial couple’s first tasks after his reign began in May was to host U.S. President Donald Trump and his wife Melania on a state visit.
Next in line to the throne is Naruhito’s younger brother, Akishino, 53, followed by Akishino’s son, Hisahito, 13. Isabel Reynolds, Bloomberg