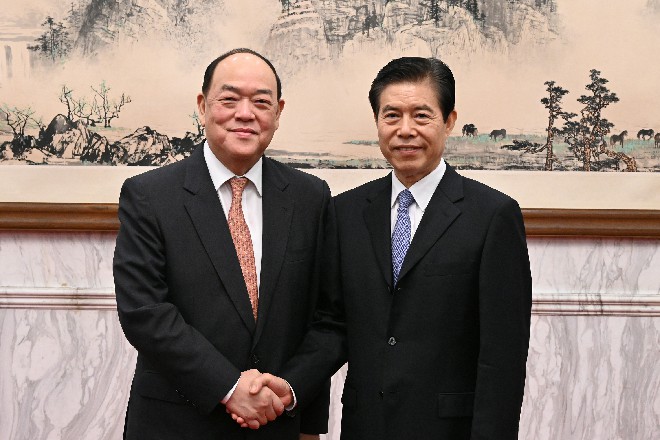 CHINA’S Minister of Commerce and the Macau Chief Executive have both commended Macau’s efforts and achievements in the fight against Covid-19.
In a Wednesday meeting in Beijing with the Macau’s head of government, Ho Iat Seng, China’s Minister of Commerce, Zhong Shan, applauded Macau’s alignment with the Central Government’s leadership and directives, adding that it had helped to contain the coronavirus. Zhong went on to say that he felt that Macau has been fully developed economically and socially. The society, he noted, is also very stable.
In return, the Chief Executive explained to the Ministry of Commerce that it was “under the leadership of the Central Government, the SAR Government’s united effort and all residents’ commitment, [that] we’ve survived the past eight months.”
“This is not a simple achievement,” Ho added, with an exclamation of agreement heard from other officials at the meeting.
Ho explained that the pandemic has brought economic turbulence to Macau, but that the city has managed to keep a handle on the situation.
“Last year we saw 40 million tourists, while this year, so far, it’s been virtually zero,” Ho said. “Given that, our economy is under stress.”
“What is good is that we have maintained a reliable surplus over the past 20 years of the Macau SAR, which is […] able to support us during the pandemic,” he added.
Meanwhile, the Chief Executive stressed to the Minister that “this government has not relaxed on livelihood matters. We have tried our best to encourage [Macau residents] to continue spending to maintain the pillar of the economy.”
Wednesday saw the first nationwide lifting of quarantine requirements since the first outbreak of Covid-19.
Ho revealed that he purposely picked this particular date to set off on his trip to Beijing. In his opinion, it constitutes a symbolic message to the general public.
Ho is in the capital city to participate in official discussions with national authorities regarding Macau’s cooperation with neighboring region, Hengqin. He will remain in the capital city until next Monday.
The government head reiterated that Macau is eager to move forward with the Guangdong-Macau Intensive Cooperation Zone initiative.
Ho stated that the project was in accordance with President Xi Jinping’s directive to continue developing Hengqin using a framework based on cooperation, in order to create a favorable environment for Macau’s adequate economic diversification.
In return, Zhong stated that his Ministry would give its support – in line with the Central Government’s directives – to promote innovative mechanisms for the development of Hengqin, in order to advance the economic diversification of Macau.
The two officials also talked about the next Ministerial Conference of the Forum for Economic and Trade Co-operation between China and Portuguese-speaking Countries (Macao). Zhong said that the Ministry of Commerce would support hosting the event once the pandemic was under control.
Land resources in Hengqin could be used to provide Macau enterprises with fresh space for the development of new products and to advance the city’s traditional Chinese medicine sector, it was suggested.