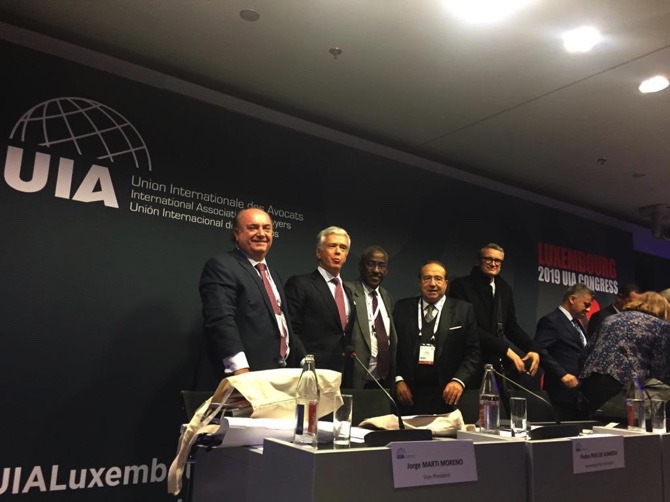 President of the Macau Lawyers Association Jorge Neto Valente has been made a member of honor of the International Association of Lawyers (UIA), following a proposal by the organization’s president Issouf Baadhio.
Neto Valente is currently in Luxembourg attending the 63rd UIA Congress, along with hundreds of lawyers from different countries and regions.
Established in 1927 and with members in over 110 countries, the UIA is a global and multi-cultural organization for the legal profession that facilitates professional development, stimulates learning and networking, and promotes the rule of law.
Neto Valente spoke at the Portuguese Speaking Lawyers Forum – a group created within the UIA – during the congress, an earlier instantiation of which took place in Macau back in 2013.
In his address, the Macau Lawyers Association president spoke about the publication of the new Macau Arbitration Law and the potential within it, highlighting the settlement of disputes between Chinese companies and Portuguese- speaking countries, and the role of the Macau SAR as a Center for International Arbitration in the Greater Bay Area.
Back in September, the lawyer declared that the government should “promote and support the development of Macau with the necessary material resources as an arbitration and mediation center.”
According to Neto Valente, Macau is not yet structured as an arbitration and mediation center to be able to compete with its neighboring regions, such as mainland China and Hong Kong, both of which have been officially promoting this in their jurisdictions for many years.
Neto Valente previously remarked that the Belt and Road Initiative and the Greater Bay Area plan will bring opportunities for Macau lawyers and will also highlight the respective individual advantages of the legal systems of mainland China, Macau and Hong Kong. LV