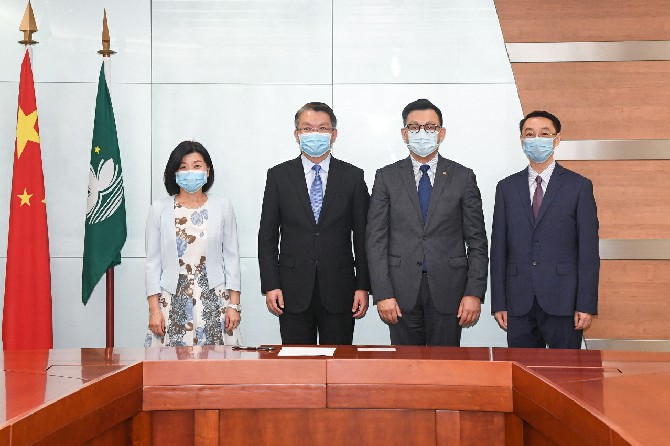 Lau Wai Meng, the new president of the Macao Trade and Investment Promotion Institute (IPIM), officially stepped into office yesterday, according to the executive order published in the Official Gazette.
Secretary for Economy and Finance Lei Wai Nong appointed Lau for a one-year term ending in May 2021. The official announcement states that Lau’s experience and professional background qualified him for the post.
Before his new role, Lau was the Deputy Director of the Economic Service Bureau (DSE). He has a master’s degree in public administration from Sun Yat-sen University and a bachelor’s certificate in business administration from the University of East Asia (the predecessor of the University of Macau).
Lau has worked in public service since 1990, and has worked for departments including the Labour Affairs Bureau, the Human Resources Office, and the Commission of Audit.
The new IPIM head had previously told local media that his department would strengthen efforts to promote Macau’s trade and investment environment.
Lau succeeds Irene Va Kaun Lau in the role. Irene Lau has held the role since October 2018, after the arrest of her predecessor, Jackson Chang.
Irene Lau was the acting IPIM president until May 27 last year, when she was officially moved into the position of president. Before her short year of service, IPIM had been under leadership of Chang for eight years. However, Chang was taken into custody on corruption accusations.
Lei’s dispatch yesterday praised Irene Lau for her work in the development of Macau’s exhibition and trade affairs in particular.
The secretary also appointed Chan Hong Sang to fill the vacancy at the DSE after Lau’s departure yesterday. Chan has served on the Consumer Council since 1995 until this new appointment.
In addition, the Secretary for Administration and Justice André Cheong moved Ng Wai Han, the former deputy director of the Labour Affairs Bureau, to the position of deputy head of the Public Administration and Civil Service Bureau. JZ