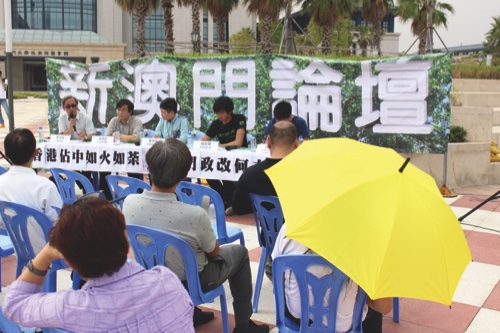 Yesterday, the New
Macau Association hosted a “New Macau Forum” on campus at the University of Macau Hengqin, to discuss the influence of Hong Kong’s Occupy movement on Macau, as well as future MSAR constitutional reform. The organizer also invited Frank Chio, a member of the Hong Kong Federation of Students, to explain the current situation in the neighboring SAR.
One of the forum guests, lawmaker Ng Kuok Cheong, said that the central government has already allowed Macau to elect the Chief Executive by universal suffrage after 2014 without the need to change or amend the Basic Law. However, it is the vested interests in Macau, or what he described “the provincial tycoons”, who are preventing it from happening.
Ng Kuok Cheong claimed that the decision by, and explanation from, the central government has already indicated that Macau can elect its Chief Executive “if necessary” after 2014 without needing to amend the Basic Law. He also claimed that since the Basic Law does not state that there has to be a nomination committee to nominate candidates in a CE election, he thinks that public nomination does not violate the Basic Law either.
The lawmaker then pointed out that even Chui Sai On’s 2014 election platform indicates that he will be progressively advancing the development of democracy in Macau in accordance with the Basic Law. “Therefore, we are telling Macau residents that, first, we are not in conflict with the central government. Second, we are not even in conflict with Chui Sai On. Third, [universal suffrage] does not go against the decision of the National People’s Congress,” he said.
In fact, he believes that the biggest obstacle in the path towards universal suffrage is the vested interests in Macau. “Those ‘provincial tycoons’ refused to relinquish their privilege and interests and accept universal suffrage… I hope that we can convince the tycoons and convince the residents to prevent the tycoons from blocking our path,” he said.
Another guest, social commentator and TDM radio guest host Choi Chi U, reckoned that Macau people only focus on issues of livelihood without realizing that the root of their problems is in fact politics. “In many cases, you can see that Macau people put priority on livelihood issues. We criticize everything everyday and have lots of complaints to the government about our well-being. But we are not used to and do not realize that the root of livelihood issues is politics,” he said.
Moreover, Mr Choi suggested that the Occupy movement in Hong Kong has awoken some residents in Macau. “More and more young people and family of mine enquire about the reasons that motivate people to sleep on the streets for forty days. More young people have begun to reflect on the issue,” he said. “The crux is how to awaken more Macau residents in order to see the future of constitutional reform in Macau,” he said.