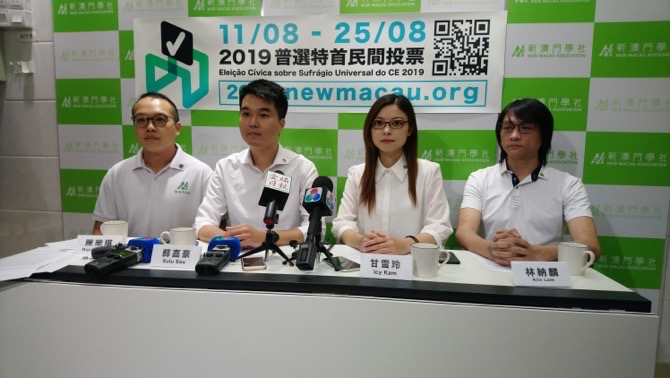 Local pro-democracy group New Macau Association (ANM) will hold a “voting activity” between August 11 and 25 to assess public opinion on the manner by which Macau’s top official should be chosen, the association told a press conference yesterday.

The association asserts that local citizens should form the core of the city’s democratization.

Pursuant to the Basic Law, Macau’s top official is selected by an electoral college consisting of 400 people, versus the approximate 307,000 people entitled to vote in the Legislative Assembly election.

The voting will take place via a dedicated website made for this purpose. As explained by the association, the website will only contain one question: “Do you agree that the Chief Executive of the Macau SAR should be elected by universal suffrage?”

ANM provided its understanding of the term “universal suffrage”, namely that “the Chief Executive shall be elected directly by all Macau voters in their free and equal exercise of the right to nominate candidates and the right to vote.”

In 2014, a similar voting activity was held to assess the public’s response to the popularity of then-candidate Chui Sai On. The administration promptly cracked down on the activity and arrested several vote organizers for unlawfully handling personal data.

Two journalists were also arrested for the misuse of the police’s official emblem. The logo had been published in a photograph related to a news report about a police officer who had participated in the activity.

When questioned as to whether he expects a similar response with this latest voting activity, association member and lawmaker Sulu Sou said the ANM is not in a position to comment on the 2014 activity “because we were not the organizer.”

Nonetheless, the lawmaker recalled that the association has organized its own “referendum” at least twice. The first was in 2012 to collect responses on the political reform package, while the second in 2016 was to nominate nicknames for the new pair of pandas sent to Macau from the mainland.

He added that it might not be necessary to always think negatively about the government. For the purpose of goodwill, the association holds there is no need for the government to fear this voting process. In contrast, it should “see the vote positively and humbly.” It is the exercise of the rights of free speech and democracy, the ANM notes.

Sou elaborated that there are different activities happening every day. This one just happens to be focused on universal suffrage. “The government should respect all events without fear or favor, as well as the comments they obtain,” said Sou. “These comments should generate the synergy for the next administration’s work towards universal suffrage.”

Even so, the Electoral Affairs Commission for the CE Election has recently issued a notice, reminding everybody that no poll results should be released from August 10 to 25.

The association emphasized that it will not be a popularity poll. “We purely hope citizens can express their opinion on whether the city should progress towards universal suffrage in the Chief Executive Election,” Sou said on the association’s behalf. “Therefore, [the question] will not involve any individual or any candidate. [Citizens will] only express their opinion on political reform.”

The organizer will use servers and a telecom service provider outside of Macau to ensure maximum security. Phone numbers collected will be duly eliminated after the activity.

Prior to and during the voting period, the association will conduct community visits to explain to residents the importance of universal suffrage, which the association considers to be the foundation of effective administration. Anthony Lam