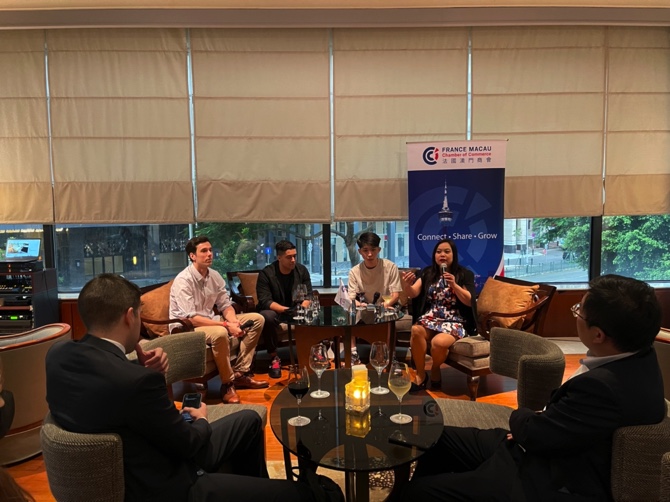 Current loyalty programs can see great advances in NFT technology, including but not limited to unique and irreplicable membership cards, a panel of IT industry speakers announced recently.

The France Macau Chamber of Commerce (FMCC) organized an evening seminar-over-drinks that presented a panel discussing the metaverse and NFT and related technologies, which were collectively referred to as Web 3.0.

The panel of speakers noted that, unlike the previous version, Web 3.0 is distinguished by its decentralization. People can read, write and own a certain space. “All data is saved in a decentralized place and no entity will be able to keep your data,” Roy Lee, co-founder of T-Rex Technology, said.

The idea of the metaverse has emerged in recent years. More precisely, as Mary Mendoza, a member of the Technology Innovation Committee of FMCC and moderator of the panel, put it, “The term got its popularity when Facebook rebranded its [parent company] as Meta.”

Fearing some people may not yet be familiar with the term, Mendoza invited a panelist, Olinto Oliveira, general manager, MCI Hong Kong & Macau, to explain “what metaverse is not.”

“It’s not a program, a device or an app,” Oliveira first clarified, as Mendoza revealed that some people thought the metaverse was an app. “It’s an infinite space in which engagements can be conducted in a way that has not been [seen] before.”

In addition to Lee’s explanation of Web 3.0, Oliveira said that in the future, companies will be able to create infinite spaces, which can be manipulated, altered, changed and personalized in a way that has never been seen before.

“It’s very far-reaching in terms of what we’re able to achieve,” Oliveira concluded.

New terminologies have emerged alongside metaverse, such as blockchain, cryptocurrency (crypto) and NFT. When asked by Mendoza to give some explanation of them, Oliveira said they all happen in the same ecosystem and have a lot of commercial applicability.

NFT, for example, will verify ownership of data as well as the travel that they have made. Oliveira used healthcare as an example to explain the business application, which is now a reality in Canada.

“In fact, everybody has a set of NFT data, which is their health records,” he said. “When you go to the hospital and give [them the right] to access your NFT health records, they will be able to take information from there.”

He further explained that pharmaceutical companies can subscribe for medical data directly from the concerned person. When the person no longer wants to offer the subscription, they can suspend it immediately.

Another scenario is that products that can be counterfeited, for example, wine and sneakers, can have their copyright protected by NFT. “Whether it’s fake or not fake; where it has been; [NFT] gives a lot of power to the creator and owner,” Oliveira explained.

On how NFT can help amend existing loyalty programs, Fauchet cited the case of non-art retail to explain that. “For example, currently [convenience stores] are giving out stickers for people to buy merchandise later,” he said. “With NFT, people can trade these stickers on the web.”