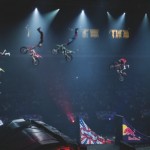 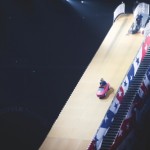 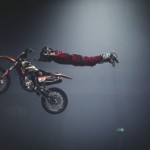 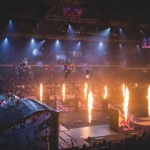 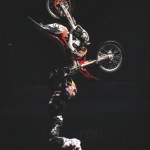 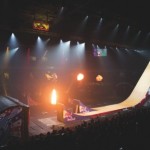 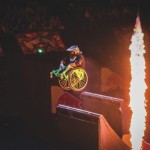 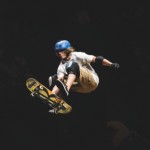 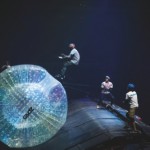 Travis Pastrana’s Nitro Circus Live delivered a live action sports show at the Venetian Macao’s Cotai Arena Saturday evening, with a second show following yesterday. Led by extreme sports icon, 17 times X Games medalist, Red Bull athlete and founder of Nitro Circus Travis Pastrana, Saturday’s performance showcased death defying stunts and new tricks.
The audience witnessed action sports athletes pushing their limits by performing a host of dangerous stunts – on motorcycles, snowmobiles, quad bikes, and a range of unorthodox conveyances, including a bath tub, tall bike, tiny bike, a lazy boy couch, a rocking horse and a wheelbarrow.
Headed by Pastrana, who was performing in Macau for the first time, the athletes threw themselves in the air with flip combinations, including double and even triple backflips. A 4-person backflip was also performed with the participation of three audience members, while the rest of the audience watched at the edge of their seats.
It was also an evening full of firsts – the most dangerous stunt in action sports, the FMX double backflip, was performed by Australian Josh Sheehan for the first time in Asia, as were all kinds of backflip combinations on a 300 kg snowmobile and a 200 kg quad bike. And the audience bore witness to the tsunami double backflip and the 720° front flip, tricks both invented by the Nitro Circus Live crew. The crowd favorite though was Aaron ‘Wheelz’ Fotheringham, who brought the audience to its feet when he performed his wheelchair front flip.