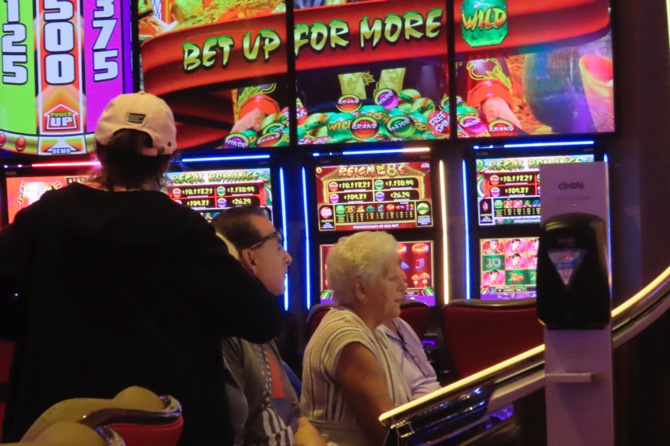 New Jersey’s casinos, horse tracks that offer sports betting and the online partners of both types of gambling outlets won $470.6 million from gamblers in August, up more than 10% from a year earlier, according to figures released Friday by state gambling regulators.

The amount of money won from in-person gamblers at casinos was nearly $274 million, up 4.4% from a year earlier. But that total still lagged behind the level of August 2019, before the coronavirus pandemic hit, when the total was more than $286 million.

Returning to pre-pandemic levels for in-person gamblers has been the main goal of Atlantic City’s nine casinos, regardless of the fact that money from internet and sports betting continues to grow.

Those revenue streams are misleading, casino executives say, because casinos do not get to keep all that money; it must be shared with third parties including tech platforms and sportsbooks. By some estimates, as much as 70% of internet and sports betting money is not retained by the casinos.

“It has been a great summer for Atlantic City and the region,” said James Plousis, chairman of the New Jersey Casino Control Commission. “The recent efforts to create impressive in-person experiences will continue to provide positive momentum going into the fall.”

She noted that in-person casino winnings, while trailing the pre-pandemic level of August 2019, still exceeded every other August since 2015.

“The relatively slow growth of brick-and-mortar gaming revenues compared to the increasing contribution of internet gaming to total revenue could potentially suggest a change in consumer behavior that doesn’t cannibalize in-person gaming but includes significant internet gaming activity,” she said. “A decreased reliance on exclusively in-person gaming activity has the potential to keep the New Jersey casino industry competitive with its neighbors and make it more resilient to market disruptions that might potentially occur in the future.”

The Borgata had its second-best month ever in August, trailing only the $124 million it won from gamblers in July. Both those figures represent the highest totals ever achieved by an Atlantic City casino since legal gambling began here in 1978.

For the first eight months of this year, the casinos, tracks and their partners have collectively won $3.38 billion, up 13.2% from the same period last year. WAYNE PARRY, ATLANTIC CITY, N.J., MDT/AP