No new record but third gold for Rojas in triple jump 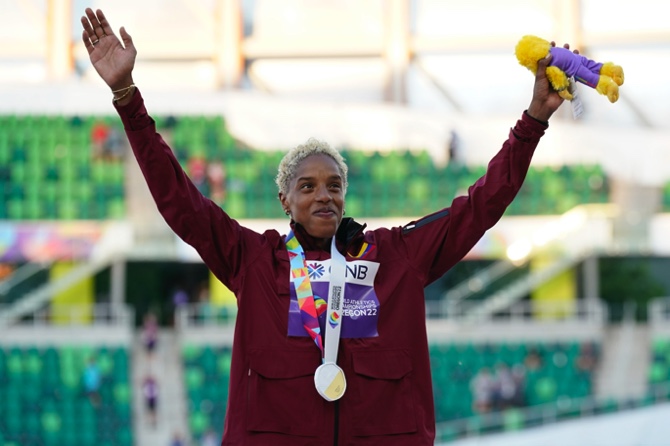 The best triple jumper on the planet is now a three-time world champion. And even though there was no new record to go with her victory, Yulimar Rojas was grateful that at least she had fans on hand to watch her perform.

The Venezuelan star captured her third straight title Monday, winning the final with a jump of 15.47 meters. That was 27 centimeters away from her world record but still good enough to romp to a 58-centimeter victory over Shanieka Ricketts of Jamaica.

“I wanted a longer jump,” Rojas said. “But I am happy to return to this beautiful stadium, to see the crowd. I have had great feelings.”

The 26-year-old faced uncertainty in the run-up to worlds. After missing a meet last month in Madrid due to an injury to her left leg, she hadn’t been seen or heard from.

She let her jumping do the talking at Hayward Stadium, a track and field hotbed where fans clapped in rhythm before all six of her jumps.

“I come from a short preparation,” she said. “I overcame time, injury, whatever stood in the way of achieving this, and I think this is a reward for perseverance, will and belief that this was possible.”

The jumper born in a humble home in the small town of Pozuelos facing the Caribbean added this world title to those from worlds in 2017 and 2019.

She surpassed the two golds won by Colombian Caterine Ibargüen, her predecessor on the world throne of the triple jump.

Rojas took command of the contest on her second jump, the winning 15.47, and didn’t fall behind again.

After that, the goal was trying to better her record of 15.74 set in Belgrade in March at indoor world championships. That jump beat her previous record of 15.67, set in a nearly empty stadium in Tokyo at the Olympics last summer.

As the crowd revved up for her last jump, Rojas took off. When she landed, it was clear the record was out of the picture, but she let out a yelp heard across the stadium. Despite not breaking the mark, the night was over. The win was hers.

“It’s been a nice day,” she said. “I am not going to tell you that it has been one of my best days because it has not been that way. But I have left good numbers.” LUIS RUIZ, EUGENE, MDT/AP