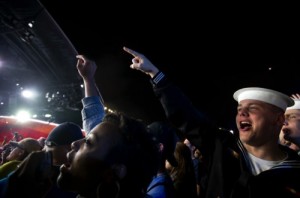 Military veterans and active-duty service members were among the swarm of music fans who packed the National Mall on Tuesday for a free Veterans Day concert, bouncing to Rihanna, head-banging to Metallica and cheering protest anthems from Bruce Springsteen, Dave Grohl and others.
The first-of-its-kind Concert for Valor, staged by HBO, Starbucks and Chase Corp., was intended to raise awareness for issues affecting veterans. While official crowd estimates were unavailable, organizers were expecting hundreds of thousands of people, making it one of the biggest events of the year on the Mall.
“What an amazing way to celebrate veterans on Veterans Day,” said actor Jack Black, one of the concert’s hosts.
While tickets were free, the celebrity hosts directed fans to ways they can volunteer or donate money to causes helping war veterans. Some in the audience said the gesture had symbolic importance.
“This is the first time since I’ve been back that I’ve felt honored to be back home, and I’m 65 years old,” said Bobby Monk, a disabled Vietnam veteran from Washington who wore a gray Army T-shirt. “They treated us like criminals when we came back home. They didn’t give us a parade.”
The massive crowd was energized by Rihanna’s anthem “Diamonds in the Sky” and an ear-splitting set by Metallica. Springsteen was more subdued, standing alone with an acoustic guitar to play a ruminative version of “Born in the U.S.A.,” about a disillusioned Vietnam veteran.