Old HK airport turned into billions worth of luxury condos 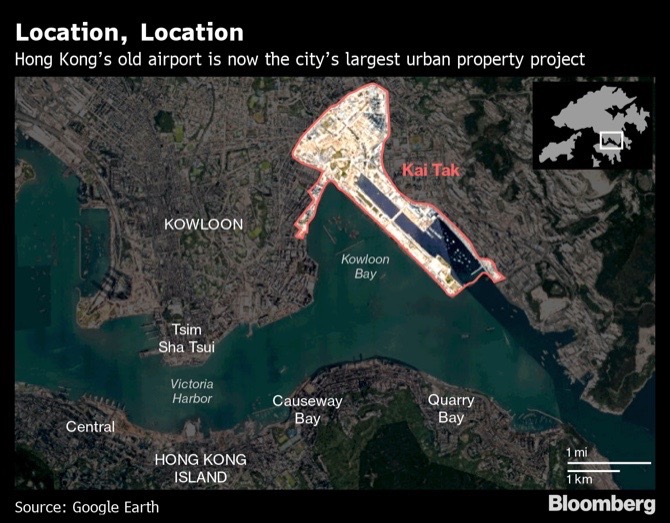 Now, the site is morphing into one of the city’s biggest real estate developments with multi-million-dollar apartments slowly filling up even as new parcels of land go for record prices. China Resources Land Ltd. and Poly Property Group Co. last week paid HKD12.9 billion ($1.7 billion) for a plot, an unprecedented amount from mainland developers, who snapped up almost 60% of residential land sold by the government in the first half.

Roughly the size of New York’s Central Park, and jutting into Victoria Harbour just across from Hong Kong island, Kai Tak offers a rare opportunity to develop prime real estate in the center of one of the most densely populated cities on Earth. It’s also another reminder of the city’s rising inequality.

Hong Kong-based developer Sun Hung Kai Properties Ltd. paid HKD25.2 billion for a single plot last year. That worked out at $2,265 per square foot of floor space, meaning a two-bedroom unit will probably be priced at about $2.5 million, according to Thomas Lam, an executive director at Knight Frank LLP. A three-bedroom apartment in New York’s Upper East Side costs roughly the same.

“With this sort of valuation, it doesn’t sound like the area is going to emerge as a particularly affordable housing location,” said Simon Smith, head of research and consultancy at Savills Plc. “This looks like middle and upper-end housing is probably more likely.”

So far, Kai Tak has contributed HKD173 billion to government coffers since land sales started in 2013, figures from Savills show. The remaining land will fetch about a further HKD110 billion, according to Knight Frank estimates.

Once the entire project is complete – sometime in the mid-2020s – the government expects the area to house 90,000 people, along with hotels, office towers, a state-of-the-art sports stadium and parks.

Kai Tak was the city’s only commercial airport from 1925 until Chek Lap Kok opened on Lantau Island in 1998. It was one of the most challenging airports in the world for pilots to land at, with planes flying so close to apartment buildings that passengers could see residents going about their daily lives, while plane-spotters lined rooftops to watch incoming aircraft.

Now, the transformation is just one of the many ways Hong Kong is freeing up land in order to boost housing supply and tackle runaway property prices. The government is also considering converting farmland to residential use, burrowing underground, and even taking over part of the city’s biggest golf course for homes.

The most ambitious, and controversial plan is the ‘Lantau Tomorrow Vision’ – a proposal to reclaim 1,000 hectares of land from the sea off Lantau Island. MDT/Bloomberg