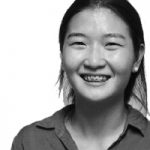 Earlier this month, I took a taxi from the San Ma Lou BCM taxi stand to the Macau University of Science and Technology (MUST).

On that particular day, I was lucky enough to get a taxi immediately upon arriving at the taxi stand. The taxi had four stickers stamped on all four door windows celebrating the 70th anniversary of China. As it was around the time of the major holiday, despite the fact that seven days had already passed, I did not give the stickers any special look or thought. I merely hopped into the vehicle and greeted the driver with a “Hello, good morning! MUST, thank you.” The driver was extremely nice; he turned his head to me, smiled and nodded. I thought “Ok, at least a polite one today.”

Soon afterwards, he made a turn to Av. do Infante Dom Henrique. Everything was normal until then. Not even a little sense of self-protection came up until he reached the Portuguese school, where he stopped waiting for the traffic light to turn green. He then asked me, again very politely, “which bridge do you want to take? The old bridge [the Governador Nobre de Carvalho Bridge] or the Friendship Bridge?” I was focused on doing paperwork, my head pointing down, when he asked the question. Caught in a sudden surprise, I replied: “This one in front [the old bridge].” Stunned, he exclaimed, “Huh, this one!? Ok.” Bang, I am doomed. For one second, I thought: he was testing me. Why didn’t I say ‘old bridge’, acting like I was a local resident who has lived in Macau longer than him, even though he apparently looked older than myself? I started to become anxious: “It’s going to be a tough war, along the way,” I thought. However, I remained lost in my paperwork, head still pointing down.

The taxi then went down the bridge and took a left to the Estrada Alm. Marques Esparteiro. “Ok, he is taking the correct way,” I thought.

How stupid I was. The next moment I raised my head up, he had already made a turn onto Estrada Nordeste da Taipa.

Just like what people say in the west: “Always smile, a beautiful smile always works.”

Then he turned at Rua de Choi Long. “Ok, now I am heading to the Anglican college,” I assumed. At this moment, I thought he had already finished his big play, and that maybe it was time for him to do something right…

But I was wrong. Never underestimate an animals’ strong sense for survival. He turned into Estrada Alm. Magalhães Correia.

“Wow, fantastic. He has been playing a game since the beginning. He finally got his chance, and is still making his way towards the Friendship Bridge’s flyover.

I couldn’t hide my frustration anymore. I told him once more: “Sir, I want to go to MUST.”

With his classic, most innocent, beautiful and polite smile, he said “Yes, I am driving you to MUST.”

“Okay,” I said, turning my head aggressively in order to have a look at his license while purposely making sure he noticed my gesture.

Then, finally, 30 seconds later, he told me sincerely: “You can pay me whatever you normally pay. I thought you were going to the MUST hospital.”

Really? He was still playing his game shamelessly.

From San Ma Lou BCM taxi stand to MUST, the meter displayed MOP87.

How much I ended up giving him is not important because all I could think of, on that very special day of my life, was that he loved the country and demonstrated his strong love through his four stickers.

I wonder how many mainland tourists have fallen victim to his scams, deceptively initiated by his demonstration of love towards the same motherland.