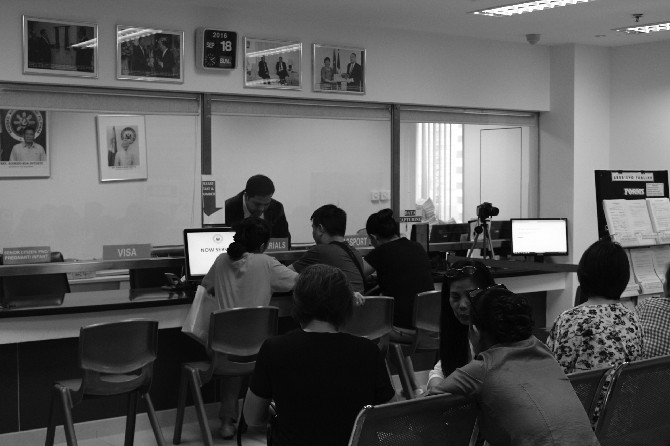 We’re really helpless at this moment as there is no other way for me, my wife and my seven-month old son to go back to the Philippines,” said Richard Tadina, just one among 134 distressed Filipinos that have been requesting the Philippine Consulate’s help so they can return home.
With only a few days or weeks remaining on their work permit or travel visas, many are running out of options. Traveling to another country prior to the Philippines is one option, but for many, the cost is prohibitive.
But so is staying in the Macau SAR longer than originally planned, giving rise to the idea of travelling to Thailand or Vietnam before landing in the Philippines.
Tadina, who is currently employed in a manufacturing company in Macau, is representing his wife and his seven-month old who were supposed to go back to the Philippines on February 8.
Initially, their flight was bound for Clark but diverted to Manila before the carrier cancelled all its flights to China and its SARs.
“I know some who went back home via Taiwan but they had a stopover of 19 hours because the region was also reducing their flights. I cannot do that in our case because we have a baby. A layover of 19 hours is not an option for us,” Tadina told the Times.
“Since I am employed, if we choose that route, I still cannot go back directly to Macau due to the absence of a direct flight between the two cities,” he added.
Fortunately, for Tadina’s family, his wife and his child still have some 18 days of their visa left, as they undertook their ‘U-turn’ trip to Zhuhai recently and were given another 20 days.
Philippine passport holders who plan to have their visas extended beyond the 30-day visa granted upon arrival are free to cross to Zhuhai and return on the same day for another 20 days.
Among the 134 distressed Filipinos are pregnant women, senior citizens and people with infants.
Last week, some of them turned to social media to plea for help, as they are not only running out of money but out of time.
“I hope you can help us because it’s really hard here. We don’t have work here and we can’t work here,” one said in video clip that was among the several videos that were posted.
Khimie Tercias, with a baby, is also six months pregnant. In need of a check-up, she is one of those calling on the government to help them be repatriated.
“I am unable to go for a check-up because of the […] cases of those infected with the novel coronavirus. I also worry for children as they are prone to viruses. What we want is to just go home,” she said.
The group of 134 Filipinos have already handed a petition to the government requesting a chartered flight back to Manila.
Many have slammed the consulate for its slow move in assisting the community. However, Consul General Lilybeth Deapera implied that the decision to request a chartered flight from Manila is not under their control.
Deapera yesterday briefly told the Times, “there are still no replies from Manila” regarding a solution.
However, the indefinite answer from the consulate has not appeased the community.
Tadina considers himself lucky because he can continually provide for his family’s needs. But that is not the case for many others.
“Fortunately, I’m working and I can provide for them. But what about those tourists? I could really see and feel their dilemma when we handed the petition letter [to the consulate] on Tuesday,” he said.
There are still several Filipinos who are stranded in the SAR who have not come forward to the consulate. Some of them are just waiting for the travel ban to be lifted, hoping this occurs before their visa ends.
Yet since three of the airlines that fly to and from Macau and the Philippines have extended their travel ban, their chances are becoming slimmer by the day.

To ease some of the burden of the group, the Filipino Community Alliance in Macau have called for mask donations for these remaining tourists, as this particular group is not included in the government’s mask distribution measure.
Led by the president, Hazel Mamanghon, the association has packed a total of 700 masks, which will benefit 140 Filipino tourists in the city. Each tourist will be able to receive five masks per pack. According to organizers, this is just one way the community can show solidarity.