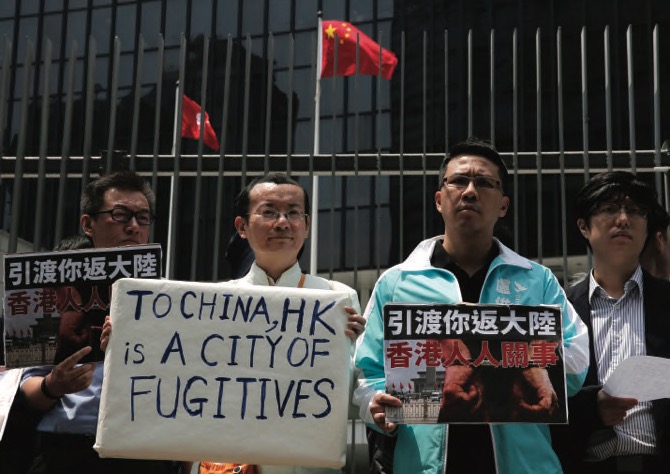 Hong Kong introduced revised extradition laws before the legislature yesterday despite concerns they would allow suspects to be sent to face torture and unfair trials in mainland China.

The amended Fugitive Offenders Ordinance and the Mutual Legal Assistance in Criminal Matters Ordinance were heard before the Legislative Council and now head toward passage at a later date.

Business, legal, human rights and journalists groups have expressed concern over the proposed changes, saying they will damage the territory’s reputation for legal independence.

The amendments expand the scope for the transfer of criminal suspects to China and remove the legislature’s right to scrutinize individual extradition decisions filed by Hong Kong’s chief executive.

Hong Kong currently limits such extraditions to jurisdictions with which it has existing extradition agreements or to others on an individual basis under a law passed before the semi-autonomous territory’s handover from British to Chinese rule in 1997.

China was excluded because of concerns over its poor record on legal independence and human rights. In recent years, mainland authorities have gone after opponents by accusing them of dubious crimes such as tax evasion, crystalizing worries among critics and others.

Lam’s government argued the revisions were needed to close legal loopholes, while opponents say that is merely an excuse to pursue China’s agenda of reducing Hong Kong’s legal independence.

The Hong Kong Journalists Association and a dozen other groups issued a letter yesterday saying the amendments would “not only threaten the safety of journalists but also have a chilling effect on the freedom of expression in Hong Kong.”

“The amendment will make it possible for mainland authorities to demand the surrender of journalists in Hong Kong, citing all kinds of unfounded charges,” the letter said.

It said that threat would “muzzle both journalists and whistleblowers, dealing a further blow to the already limited freedom of speech that Hong Kong still enjoys.”

Thousands marched to government headquarters on Sunday to show their opposition to the amendments and further protests were held outside the legislature, known as Legco, yesterday.

“Most likely there will more actions from different civil society groups and also from the citizens,” said Jeff Au, co-organizer of the protest. “So, I think the government, they need to really need to think about aborting the entire law and the entire proposal.”

Standing amid placards reading “withdraw the evil law,” pro-democratic councilors, who are firmly in the minority, repeatedly voiced their opposition inside the council chamber during the first and second readings of the revised laws, although they were not given a formal opportunity to register comments. Katie Tam, Hong Kong, AP