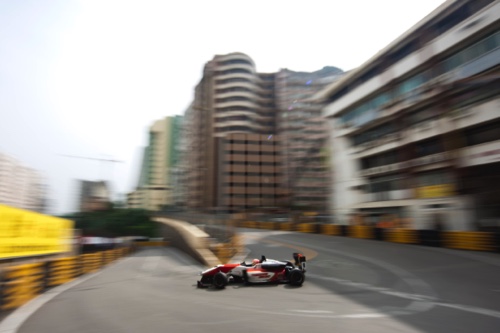 As expected, this year’s line-up is very strong, with the ‘crème de la crème’ of these young racers

The Formula 3 is undoubtedly the “One” competition to follow in the Macau Grand Prix. This event has kept its original concept for more than 30 years through the many evolutions undergone since its beginnings in 1983. Today, an F3 car is considered to have the ideal power-to-weight ratio, specifications and technical regulations to allow drivers to have the ideal training conditions for Formula One.
This year, once again, the big names racing in these single-seat cars join together in Macau to take part in more then a race, or a season finale.  For many of them, the Guia Circuit is the final examination before heading to higher competitions.
As expected, this year’s line-up is very strong, with the “crème de la crème” of these young racers full of ambition and also a few talents who’ve already achieved some recognition. To begin, let’s go straight to one of the favorites, Max Verstappen, the young Dutch driver who’s already signed a contract for the coming season with the Scuderia Toro Rosso F1 Team, becoming the youngest ever F1 driver. He will be racing the Guia Circuit for the first time, aiming to demonstrate the skills and talent that took him straight to the F1 spotlight.
Side by side will be the French Esteban Ocon, just crowned FIA European Formula 3 Champion, who will be driving a Dallara – Mercedes from Prema Powerteam. Ocon was one of the surprises of this season since he is still a rookie, who made his F3 debut at the Macau Grand Prix last year. This time he will be racing with the historic Theodore Racing Team. Ocon, who is already racing F3 with the Lotus F1 Junior team, will be joined by the Canadian Nicholas Latifi and the Italian Antonio Fuoco, two other candidates for top positions.
Another spotlight will be pointed on Tom Blomqvist, the 20 year-old British Champion of Formula Renault UK in 2010 and currently racing under Jagonya Ayam with the Carlin – Volkswagen Team. He will be racing in Macau for the third consecutive year. In last year’s race with Fortec Motorsport –
Mercedes, Blomqvist improved substantially to finish in 8th position. This year, he finished 2nd in the F3 European Championship, just behind Ocon and ahead of Verstappen, which gives an indication of what we can expect from him. And just like in years before, there is nobody simply wanting to tour around. These are youngsters with a lot of fresh adrenalin running, and they will give 100% until the checkered flag waves. Renato Marques