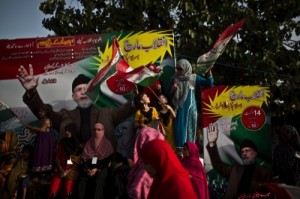 Supporters of fiery anti-government cleric Tahir-ul-Qadri, his image seen in the background, take part in a protest in Islamabad, Pakistan

Tensions rose in the Pakistani capital yesterday as an opposition rally prepared to march toward the Parliament and government headquarters in Islamabad later in the day and authorities beefed up security measures to prevent violence.
The demonstrators, who have camped out in Islamabad in two rallies since last week, are demanding that Prime Minister Nawaz Sharif step down over alleged vote rigging in the 2013 parliamentary elections.
The rallies — with tens of thousands taking part — are led by cricket-star-turned-politician Imran Khan and fiery cleric Tahir-ul-Qadri who have vowed to keep up the sit-ins until Sharif resigns.
Khan, who heads Parliament’s third-largest political bloc, announced on Monday that he and his supporters would march into Islamabad’s so-called Red Zone, which houses embassies, the Parliament, government offices and the residence of the prime minister and the president.
Yesterday, he said on Twitter that he would himself lead the march and urged Sharif to resign. Authorities have said they would not allow protesters to enter the Red Zone and asked the two opposition leaders to reconsider.
Instead of the march, “we request that Imran Khan and Tahi-ul-Qadri agree to talks with the government,” said Ahsan Iqbal, a senior Cabinet minister.
“Let us sit and find a political solution,” said Iqbal, who was appointed by Sharif to lead the talks with the opposition.
About 30,000 security troops fanned out across the Red Zone and Islamabad ahead of the announced march, the police said.
Khan’s Tehrik-e-Insaf party has been complaining that Sharif’s Pakistan Muslim League-N rigged last year’s elections. Sharif has agreed to set up a judicial commission to probe the allegation but refused to step down. AP