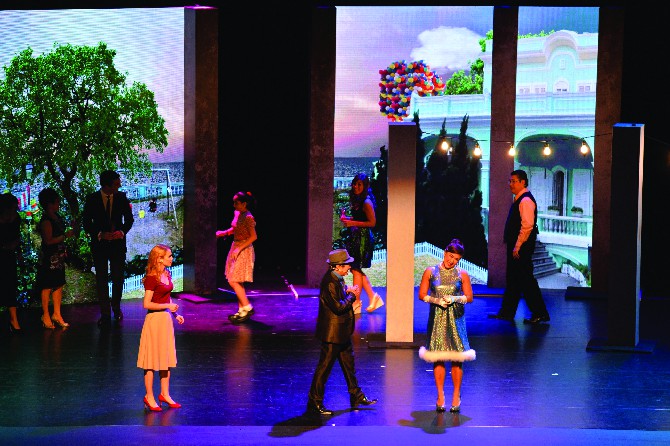 Macau’s Patuá-language Theatre has been included among the distinguished list of cultural artefacts on the Intangible Cultural Heritage of the People’s Republic of China, the Times learned from the leader of the local patuá-language theatre group “Doci Papiaçám Di Macau,” Miguel de Senna Fernandes.
According to Senna Fernandes, the news of the listing broke yesterday, with their entry published in the listing of the official Intangible Cultural Heritage website under serial number 1425 and officially confirmed to Senna Fernandes by the Cultural Affairs Bureau (IC).
For their leader, the listing is a well-deserved culmination of the group’s efforts in bringing back and keeping alive this local ancient tradition for nearly 28 years.
“It’s with pride that we witness solid teamwork, matured over years of experience and wisdom, so that our Theater has [developed] its unique characteristics. Above all, we did this difficult art of being with humor, which only the work of one solid team made possible. Winds and storms were in the end good in this difficult task of making people laugh,” said Senna Fernandes acknowledging the accolade. “Years of resilience, work, creativity and stubbornness in the middle of tears and laughs, anger and joy, we can now say out loud: Pódi! [We did it!].”
Explaining to the Times the importance of the honor, Senna Fernandes highlighted how “[its importance] to the culture [is that] patuá-language theatre does not exist without the patuá-language, it’s the creole [language] that makes the theatre what it is and what it achieves.”
In a message of thanks sent to all those involved in the productions and performances presented yearly as part of the Macau Arts Festival program, Senna Fernandes gave special thanks to: the IC; the former IC president Guilherme, Ung Vai Meng; former Executive Committee Spokesperson, Leong Heng Teng; and University of Macau scholar and linguist, Mário Pinharanda Nunes.
Another addition to the National Intangible Heritage list was the art of Macanese gastronomy.
This was also remarked by Senna Fernandes, who noted that the acknowledgment of traditional Macanese gastronomy in the listing comes as a double-victory for the whole community.

More responsibilities, new projects
To the Times, Senna Fernandes also noted that along with the honor of seeing the work recognized and climbing to a new status there come increasing responsibilities.
“Now we are the guardians of this new status and we are going to have more responsibilities besides the selfless persistence [in promoting the language],” he said. He went on to outline how those new responsibilities will manifest in new projects and ways of promoting patuá.
“There is an old idea that we have had for some time already; that is, the publication of all our theatre plays. We have around 30 play scripts, so this is going to be hard work — but it is very important in the preservation and spread of the language. It’s a quite ambitious step but that will have to be given.”
Senna Fernandes added that in 2023, the group will reach the milestone of 30 years of activity, making this a good time to put out “at least a part of the publications.”
Senna Fernandes noted that workshops and other activities involving the language will eventually come up and would have to move forward now, passing from just ideas and ambitions to reality.
For this new task of promoting the patuá-language theatre, the leader of Doci Papiaçám Di Macau said that he hopes to count on other people and other groups.
“Patuá-language theatre and Doci [Papiaçám Di Macau] are different things, we don’t own the language and I would be more than happy if more groups appear and the theatre [scene] would bloom.”

Folk culture, rituals and local beliefs
The last of the three local items to be included in the fifth batch of listings in the National Intangible Cultural Heritage yesterday is related to the local folk culture; namely the rituals and beliefs related to the God of Earth (God Tou Tei).
According to a statement by the IC, the inclusion is in recognition of the faith of local people for the protection of Tou Tei that has lasted for hundreds of years.
This worship can be seen in many ways, but mostly through the traditional festivals to celebrate the god that are held in small neighborhoods and local communities.
The IC also noted that the folk culture has a significant role in the residents’ sense of identity and belonging, as well as being an important manifestation of the inheritance of traditional Chinese folk culture in Macau.
With the new three inclusions, Macau sees the number of items listed as a National Heritage raised to a total of 11.