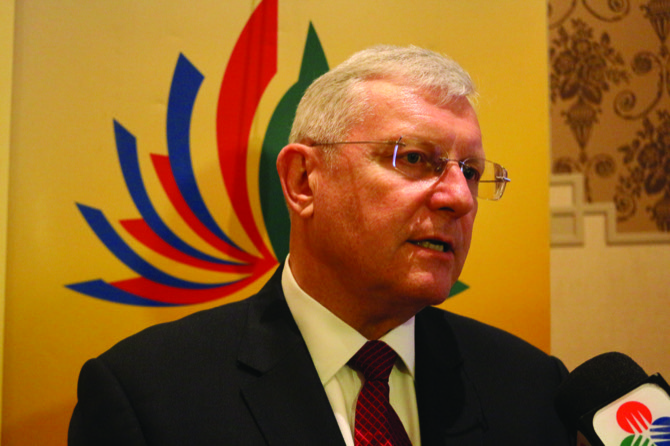 Pescod is leading Hong Kong’s biggest cultural project, in which the 40-hectare space will transform into an art and cultural hub that integrates six institutions.

In a talk he gave at the British Business Association of Macau, the official explained that the area, located in front of The Waterfront, would house some 50 individual spaces where performances, exhibitions, workshops and different events will be held.

Pescod admitted that the project faces several challenges, however he stressed that funding and commitment remain pivotal to the city’s plans for the cultural hub.

Speaking to the press, the official noted that the public consultation for the big project took some six years, with an initial budget of HKD21.6 billion.

“Honestly, any jurisdiction has the capacity to sustain a project like this. […] Every jurisdiction that I talk to […] they’re all trying to look at how culture can enhance their community and the ones that are successful are the ones that really commit to it, those that decide that they’re going to do and really deliver on it,” said Pescod.

“It’s that level of commitment. […] What you need is consistency,” he added, when asked how viable it would be for Macau to become an effective arts and culture hub.

The West Kowloon project will see its first center, the Xiqu Center – seen as a gateway to Chinese opera – be officially opened on January 20.

According to the official, the HKD21.6 billion project is a valuable asset to the HKSAR, and he noted that the government would also be paying for its basement and public infrastructure works.

“The recurrent expenditure in terms of operational [expenses], that’s always going to be challenge. […] It’s actually a complex site. On top of which, the decision to go to the basement adds a level of complexity,” added Pescod, who recently signed another three-
year contract with the project.

According to Pescod, the arts and culture hub will enhance Hong Kong’s status as a destination and could be another reason for visitors to stay longer.

He added that the government plays a pivotal role in boosting city arts and creative industries, suggesting that they should create a series of platforms where artists can come and collaborate together to advance the industry.

“The government doesn’t have to be the total provider but it can contribute in important ways. The government often has to help with simple practical things […] like is there freedom of speech, freedom of expression […] all of these are very critical for a cultural district. If you don’t have any of that then you might as well not waste your time,” said Pescod.

“Artists want that freedom of expression and government is important in that. Does it support the ability of artists to express themselves? The government’s role in this is crucial in many different layers,” he concluded.