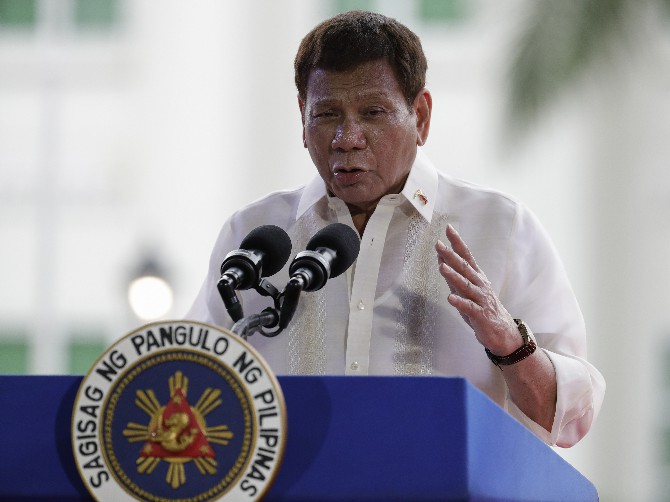 Philippine President Rodrigo Duterte said he’s ready to face possible charges in any local court for the thousands of killings under his anti-drug crackdown but never before the International Criminal Court, which he has repeatedly ridiculed.
The ICC’s outgoing chief prosecutor said last week that a preliminary examination found reason to believe crimes against humanity had been committed during Duterte’s crackdown on drugs between July 1, 2016, and March 16, 2019. She said she had sought authorization to open a formal investigation and the court’s judges had 120 days to decide.
The dates cover the period when Duterte launched his police-enforced crackdown shortly after winning a six-year presidential term up until when he withdrew the Philippines from the court.
“Why would I defend or face an accusation before white people? You must be crazy,” the brash-talking Duterte said Monday night in his first public reaction to the prospects of an ICC investigation of his deadly campaign.
He ridiculed the ICC, saying he would never get justice from the court, but added, “I will readily face a court, be accused in a Philippine court, before a Filipino judge.”
The 18 judges from the ICC hail from around the world, including judges from Asia, Africa, Europe, South America and North America.
More than 6,000 mostly poor drug suspects have been killed during the drug crackdown, according to government pronouncements, but human rights groups say the death toll is considerably higher and should include many unsolved killings by motorcycle-riding gunmen who may have been deployed by police.
Duterte has denied condoning extrajudicial killings of drug suspects although he has openly threatened suspects with death and has ordered police to shoot suspects who dangerously resist arrest.
“We kill them because they fight back,” he said Monday.
Duterte said drug dealers were a threat to national survival that had to be dealt with to prevent the Philippines from ending up like Mexico, which he described as being “almost a failed state,” where drug syndicates could field candidates in local elections.
“That’s why I want to slap the judges there. You are fools,” Duterte said. “You want my country to go down the drain.”
Despite his administration’s massive crackdown against illegal drugs, Duterte acknowledged the drugs remained a major problem. During his presidential campaign he vowed to eradicate the drug problem in three to six months, but said after winning the presidency that he underestimated the enormity of the problem.
Duterte withdrew the Philippines from the ICC in 2019 in a move critics said was an attempt to evade accountability. The ICC prosecutor said the court still has jurisdiction over crimes alleged while the Philippines was still a member of the court. Jim Gomez, Manila, MDT/AP