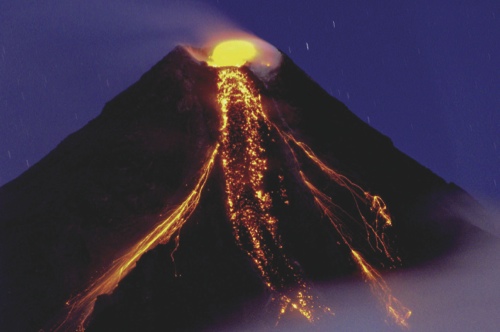 Mayon volcano, one of the country’s most active volcanoes, in Albay province, about 550 km southeast of Manila

The Philippines’ most active volcano belched out huge lava fragments that rolled about a kilometer down its slope in an ongoing gentle eruption, prompting authorities to evacuate thousands of villagers, officials said yesterday.
The Philippine Institute of Volcanology and Seismology raised the alert level for Mount Mayon, warning that a “hazardous eruption” is possible within weeks. Increased restiveness was recorded overnight, including the ejection of glowing rocks from the summit and dozens of low-frequency volcanic earthquakes.
Molten lava has accumulated at the top of the 2,460-meter volcano’s crater, creating a glow in the night sky that sparked both awe and fear among spectators.
“It’s already erupting, but not explosive,” said Renato Solidum, who heads the government volcano monitoring agency. “Currently, the activity is just lava coming down. If there is an explosion, all sides of the volcano are threatened.”
Volcanologist Ed Laguerta said he saw huge glowing lava fragments and super-hot boulders rolling down from Mayon’s crater late Monday, when thick clouds parted and revealed the volcano’s summit. He said the fragments could be seen from as far as 12 kilometers away.
Mount Mayon, a popular tourist site known for its near-perfect cone, lies in coconut-producing Albay province, about 340 kilometers southeast of Manila.
Albay Gov. Joey Salceda ordered the evacuation of up to 12,000 residents within an 8-kilometer radius of the volcano’s crater. Villagers within 6 kilometers of the volcano, which the government has declared a permanent no-go danger zone, face mandatory evacuation.
Disaster-response officials convened an emergency meeting yesterday to map out steps to avert casualties. They have been concerned over a brewing storm in the Pacific that might hit the country, including Albay, in a few days, adding possible deadly volcanic mudflows called “lahar” to their worries.
“Thousands have been evacuated since last night,” Cedric Daep, a safety officer in Albay, said by phone.
Mayor Herbie Aguas said his farming town of Santo Domingo, among the closest to the volcano, has a frightening legacy from Mayon. The volcano nearly wiped out the municipality’s entire population in an 1897 eruption with pyroclastic flows — superheated gas and volcanic debris that race down the slopes at high speeds, vaporizing everything in their path.
“We are praying that it would not be the worst-case scenario,” Aguas said, adding that nearly 4,000 of the 40,000 residents in his town who live within a government-declared danger zone had started to evacuate to safer areas.
The volcano has erupted 50 times in the last 500 years, sometimes violently, endangering thousands of poor villagers who insist on living or farming in the government-declared permanent danger zone.
Villagers living near the volcano have erected huge white crosses at the entrance of their neighborhoods, hoping they will protect them from harm.
On May 7, 2013, the volcano suddenly spewed ash, killing five climbers, including three Germans, who had ventured near the summit despite warnings of possible danger. Teresa Cerojano, Manila, AP