Poker | 3 players out of World Series 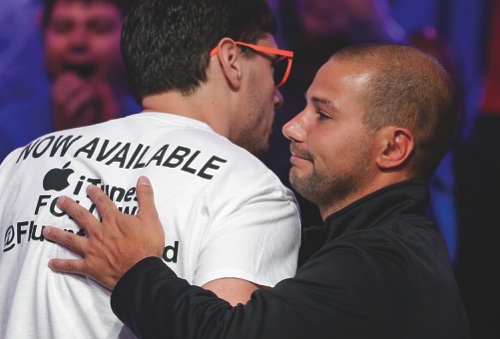 Dan Sindelar, right, embraces Mark Newhouse after Newhouse was knocked out of the World Series of Poker Final Table

Dan Sindelar of Nebraska needed a jack of spades. He got the spade, but the queen instead, making him the third player eliminated from the World Series of Poker main event final yesterday.
Sindelar went all-in with a pair of jacks that couldn’t eventually outdo a lucky ace revealed in the common cards that shifted the odds in favor of the game’s chip-leader Jorryt van Hoof instead.
Sindelar still walked away with USD1.2 million in prize money.
“It was a tough four-hour stretch for me,” he said. “I just tried not to put too much pressure on myself. I know the stakes going in.”
He might buy a house with his new winnings.
Sindelar grew up in a small Nebraska town of about 600 people called Howells Village.
When Sindelar was a second-grader in a Catholic school in Nebraska, his mother, Pat, said she got a call from his teacher saying he and his buddies had been playing cards during recess — for money.
“It’s the pastime of a small town,” Pat said.
He was at the University of Nebraska when he started playing online poker, leaving before graduating to move to Vegas and make a living from it.
Just before Sindelar was eliminated, the event lost easily its loudest and largest cheering section when Brazilian Bruno Politano lost to Felix Stephensen, 24, who had a winning pair of sevens.
The Brazilian came in to the night with the lowest chip count but managed to stay in the game more than two hours after the first player was eliminated.
“For me, eighth place is not a sad moment,” Politano said.
It’s not about the cards, he said after. “It’s a feeling. My friends, my family, everyone is here. I’m really enjoying this moment.” He vowed to return to the table somebody.
He could hardly hear the questions with his fan base continuing to chant.
“It’s the best moment in my life, of course, because I have 150 guys here screaming for me.”
Politano said he doesn’t play poker for the money, “I play poker for this,” he said, splaying his arms toward his fans dressed in Brazilian yellow and green who, once again, cheered.
The no-limit Texas Hold ‘em match was taking place at the Rio All-Suite Hotel & Casino in Las Vegas on Monday and Tuesday.
The six remaining players battled for a $10 million top prize.
Each player outlasted about 6,700 other players last June and July who paid $10,000 each for the chance to win.
The “November Nine,” as they’re called, returned Monday night after a four-month break.
At the table, some wore sunglasses and what’s become the go-to poker uniform of hooded sweatshirts. One wore a lucky hat, the same one he wore in July when he won one of the nine seats at the final table. Another advertised a musician’s album on iTunes on his T-shirt.
They are among the World Series of Poker’s youngest and greenest players in recent history, with none having won a main event title before.
Not a one of them has a gold bracelet, the signature award for the top winner in any of the individual World Series of Poker events.
The player who wins will get one in addition to the $10 million pot of winnings.
One player, Billy Pappaconstantinou, is a foosball champion who had never competed in the World Series of Poker.
The rest of the table was made up of poker players from all over the world — none older than 32.
The average age is 28, not as young as in 2010 but even that year, the oldest player was 37.
The main event, culminating this week, is just one World Series of Poker event but certainly the most watched.
The overall tournament spans seven weeks in June and July and has attracted close to 80,000 people who played (and paid with hefty buy-ins) to win in 65 events.
The World Series of Poker of today is a far cry from its original incarnation in 1970. That’s when Benny Binion set up a single table at his Horseshoe Casino and invited players who ultimately voted on a winner at the end. Kimberley Pierceall, Las Vegas, AP