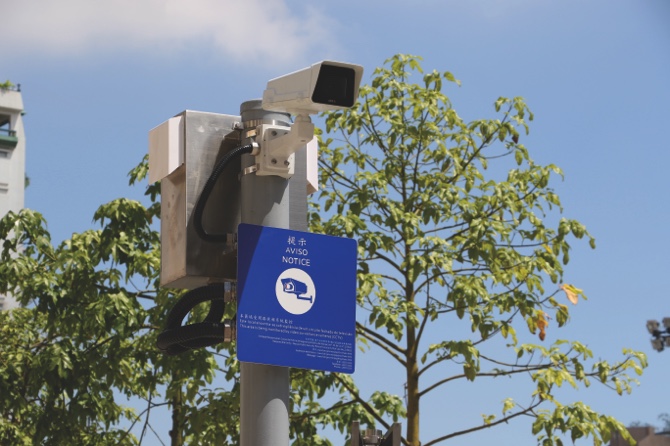 In 2020, the Unitary Police (SPU) will start testing the facial recognition functionality of some of the city’s CCTV surveillance cameras, according to a statement released by SPU yesterday.
Since the setup of the cameras has to comply with strict requirements and restrictions in terms of installation height, angle and lens pixels, the security authority plans to first select 50 cameras installed during the first and the third phases of the process in order to test the facial recognition feature in the first quarter of next year.
In the second half of next year, an additional 50 cameras will be selected to test the facial recognition function to assess the effectiveness of the city’s CCTV surveillance cameras, according to SPU.
According to Macau law, the camera image-retention period is up to 60 days, with images automatically deleted from the system after 60 days.
When the video footage constitutes evidence and the images are needed by the police, the authority claims that it will strictly adhere to application procedures to obtain the images and will destroy them within 30 days after the relevant judicial proceedings are completed. To ease public concerns, the police authority claims that it has already established a series of rules for use to ensure that the authority safeguards the privacy of members of the public.
The police authority pledges that in future, the security department will seek advice from the Office for Personal Data Protection before the facial recognition technology test is applied to ensure that the CCTV surveillance cameras will effectively assist the police authority in combating crime and in protecting the public’s privacy.
According to the government’s plan, Macau will have a total of 2,600 CCTV surveillance cameras by 2023 and 4,200 by 2028.