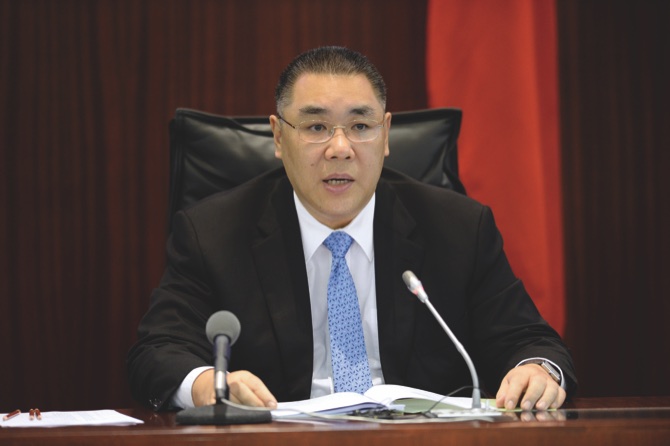 Chui Sai On went yesterday to the Legislative Assembly (AL) to present the Policy Address for 2017 that did not contain any news of significant changes to the current policies.

The Chief Executive started his speech by making a positive assessment of the governance of the region, although he acknowledged that “not few of the works are still lagging behind expectations of local residents.”

He then rolled out a set of welfare policies and subsidies that were, for the most part, kept unchanged. The cash handout policy remains, with yearly handouts of MOP9,000 for permanent residents and MOP5,400 for other residents.

The government will continue to inject MOP10,000 of seed capital into the Central Provident Fund savings account of every eligible resident. An additional MOP7,000 from the fiscal surplus will be deposited into those eligible accounts.

The old aged person’s allowance remains at MOP8,000 and the elderly pension at MOP3,450. Civil servants will get a 2.46 percent salary update. The minimum subsistence index continues at MOP4,050.

These and other welfare measures will cost the government MOP12.352 billion.

Repeating his strategy from last year, the CE preferred not to highlight one single policy or motto (this was unusual in the time when mottos like “promoting local talents” or “scientific governance” were dominant) at the Policy Address, which was awkwardly titled “Development Plan in Progress for Building a Perfect Home.”

Always speaking with a flat monotone voice and reading the plan, Chui showed optimism regarding economic prospects. “We predict that the economy could return to positive growth next year,” he said, adding that the gaming industry was expected to experience sustainable growth.

The CE pledged to help struggling small and medium enterprises (SMEs) by “assuring that non-resident workers are hired in due time.” He also said that residents should have “priority access” to jobs.

A part of his speech was devoted to educational issues. For eligible students, the government will maintain allowances for meals and textbooks. The Continuing Education Program will also continue.

One of the modifications to the existing policy is in regard to subsidies for Macau students receiving tuition in Guangdong Province. That program will be expanded to cover two more cities, namely Shenzhen and Dongguan. In terms of infant care, the government pledges to provide more than 7,000 subsidized places for childcare services for two-year-
olds.

Regarding infrastructure, Chui said that the Taipa section of the Light Rapid Transit (LRT) project is expected to be operational in 2019. As previously mentioned, the troubled Pac On Ferry Terminal should be operational next year. Four types of bus routes (some faster, others with a linking function) are being implemented and four new parking lots will open in 2017, making available 3,600 new parking spaces. The operation of one hundred special taxis able to accommodate handicapped passengers will gradually be implemented.

Regarding housing, Chui reiterated the government’s intention to prioritize social housing in order to realize the motto “housing for all.” He pledged to build 12,600 public housing units as part of short to medium-term plan and to continue the existing planning regarding a public housing project on Avenida Wai Long, in Taipa.

The role of Macau as a platform between China and Portuguese-speaking countries was also highlighted by the CE, who said there’s a need to train bilingually talented students in Chinese and Portuguese. He announced that a program for training Portuguese-speaking professionals will be developed. Chui also promised to safeguard freedom of speech and print.

The Chief Executive will be at the AL today for the second consecutive day, tasked with answering lawmakers’ questions.

For employed residents, the first 30 percent of annual income from employment will continue to be tax free, up to a ceiling of MOP144,000. There will be a 60 percent rebate in the 2017 fiscal year on the personal income tax paid by each taxpaying resident. That will be capped at MOP12,000, with the money returned in 2018.

During yesterday’s presentation, Chui pledged to amend the Labour Relations Law next year in order to introduce paid paternity leave. The law will also be revised in what concerns compensation for overlapping holidays. The later change aims to provide a solution for occasions when holidays and weekends overlap.