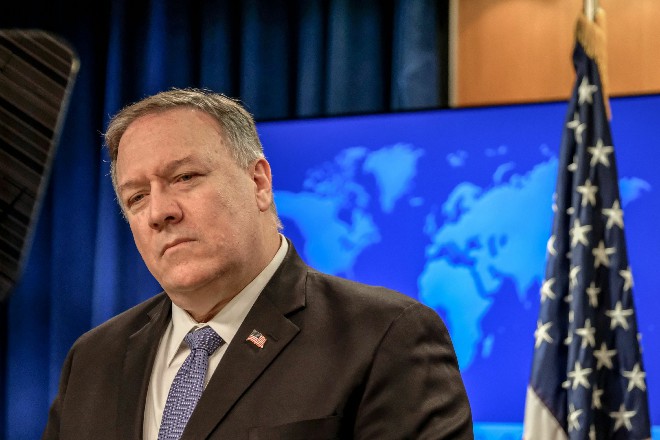 Secretary of State Michael Pompeo urged American companies to bar Chinese applications from their app stores, signaling that U.S. efforts to banish Chinese technology from U.S. computers and smartphones will extend well beyond the push to force a sale or shutdown of TikTok.
Pompeo said Wednesday that “untrusted Chinese apps” like TikTok and WeChat pose “significant threats to the personal data of American citizens” and are potential tools for Chinese content and censorship. He also called for companies to refuse to make their apps available for phones made by Huawei Technologies Corp. and for ending the use of Chinese cloud providers such as Tencent Holding Ltd., Alibaba Group Holding Ltd. and Baidu Inc. for sensitive American data.
“We don’t want companies to be complicit in Huawei’s human rights abuses or the CCP’s surveillance apparatus,” he said in reference to the Chinese Communist Party.
The “Clean Network” guidance Pompeo announced stopped short of an ultimatum and isn’t binding, but it represents an escalation in President Donald Trump’s efforts to limit the spread of Chinese technology that U.S. officials say imperils Americans’ private information and national security. Trump has pledged to ban TikTok, the viral video app, from the U.S. by Sept. 15 unless its U.S. operations are sold to an American company. Microsoft Corp. is in talks to buy its U.S. operations.
Pompeo contends that apps such as TikTok are harvesting U.S. citizens’ data, putting it at risk of being exploited by the Chinese Communist Party. TikTok counters that U.S. users’ data is stored outside China and is safe.
In another initiative, Pompeo said the U.S. will seek to ensure China can’t harvest data transmitted via undersea cable, especially that laid down by Huawei subsidiary Huawei Marine.
Chinese officials and analysts have denounced Trump’s push against their country’s technology companies.
“Pompeo and other American politicians use state security as an excuse and use state power to oppress Chinese high-tech companies,” Chinese Foreign Ministry spokesman Wang Wenbin told a regular briefing in Beijing on Thursday. “We are firmly opposed to this. Their action has no factual basis.”
“Trump’s move is threatening to split the internet, and this is something the world should avoid,” Zhao Ruiqi, vice director of the School of Marxism at the Communication University of China in Beijing, has said. “Countries should sit down and discuss the limits of national security when it comes to internet governance.”
The secretary of state’s announcement marked the latest move in the Trump administration’s campaign to counter China on multiple fronts — from tensions over the South China Sea to human rights disputes over Beijing’s crackdown on Hong Kong and its treatment of Muslims and ethnic minorities in Xinjiang province. The election-season campaign against China has stepped up significantly since Trump amplified rhetoric blaming China for the coronavirus pandemic that originated there.
Pompeo and his team argue that the technology sphere is especially important and that tougher action now will help counter China’s steady move toward global leadership in artificial intelligence and digital surveillance. In their most dire predictions, officials say that Americans’ adoption of Chinese technology could be used against them in the event of a cyber attack or military crisis with China.
“What you’re seeing is alignment around the Clean Network,” Keith Krach, the U.S. undersecretary for economic affairs, said in an interview. “Huawei along with its CCP appendages – like cloud and apps and cables – create the Orwellian big brother state which extends the great one-way China firewall, where data comes in but not out and, reciprocally, propaganda goes out, but the truth doesn’t come in.”
Pompeo didn’t say whether the U.S. will later seek to enforce the new guidelines or what authority it would use to do so, though officials have pointed to an executive order Trump signed last year to ensure a safe information-technology supply chain . Nick Wadhams, Bloomberg