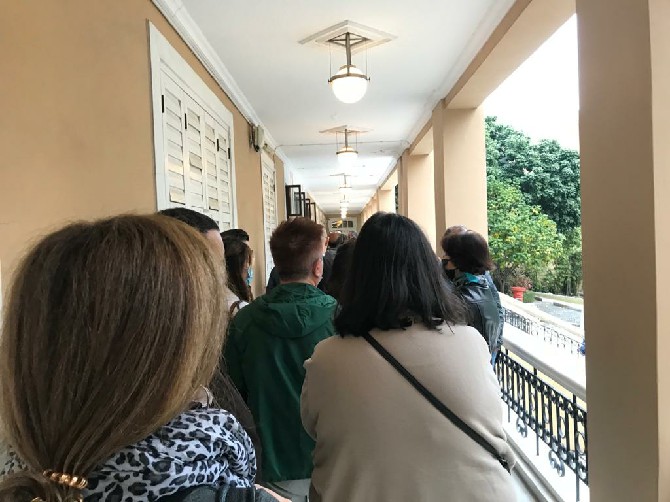 Long queues of voters yesterday at the Portuguese Consulate

The voter turnout for the Macau-based polling station for the current Portuguese presidential election is more than double the figure of the last presidential election, held five years ago.
According to data disclosed by the Consulate General of Portugal in Macau and Hong Kong (CGPMHK), by the station’s closing time, over 1,400 voters had cast their ballots in the election. This figure surpasses the 526 who voted in 2016 when the incumbent president, and this year’s candidate, Marcelo Rebelo de Sousa was elected.
The vote in Macau, which took place over the weekend, started to show signs of a strong turnout when the turnout on Saturday had already surpassed the total for 2016, with 600 voters casting their ballots on the first day.
The Portuguese Consul-General, Paulo Cunha-Alves, was surprised by the turnout. Speaking to the media after the closing of the polling stations, he said, “I was not expecting so many people. It was very encouraging to see the turnout for this event, which is very important to democracy.”
For the Consul-General of Portugal, the high number of people who showed up to vote might also be related to Covid-19 and the inability of most people to travel for almost one year.
“I think this was also a way people have found to get closer to the country in a year which has been very difficult and where most people could not return home,” Cunha-Alves noted.
The special measures in force for Covid-19 pandemic prevention slowed the process relative to previous elections, with a queuing time of about 30 minutes on average and waiting times reaching almost one hour during the peak time.
Due to this, the Consul-General noted that in upcoming elections an expansion of the number of polling stations from two to three or four would be considered. He said the decision to have two was made according to the turnout in previous elections.

Final results known
this Wednesday
The final results from the voting of citizens in Macau will only be known on Wednesday, Cunha-Alves revealed, noting that this is because Macau is an election hub and so will receive the votes cast in South Korea. These votes will be included and counted together
The presidential race in Portugal this year included a total of seven candidates: Ana Gomes, André Ventura, João Ferreira, Marcelo Rebelo de Sousa (the incumbent), Marisa Matias, Tiago Mayan, and Vitorino Silva.
In Portugal, special measures have been in place due to the country registering the highest rate of Covid-19 infections, leading to the government enforcing a new lockdown.
This did not lead to the postponement of the elections, however. They went ahead, with voters being asked to wear facemasks and to carry hand sanitizer and a pen.
This year’s unusual presidential race also saw most “street campaigning” activities replaced by online campaigning.
Fearing that the current Covid-19 restrictions could have a deterrent effect, leading people to abstain from voting, Portuguese authorities mounted a concerted campaign in the last few days urging citizens to exercise their right to vote.
If results confirm the last predictions from polling surveys, de Sousa should be re-elected within a single election round.
If the predictions prove wrong and none of the candidates obtain 50% of the votes, a second election round is scheduled to take place on February 14 between the two most voted candidates from the first round.
The new president of the Portuguese Republic will assume office on March 9.