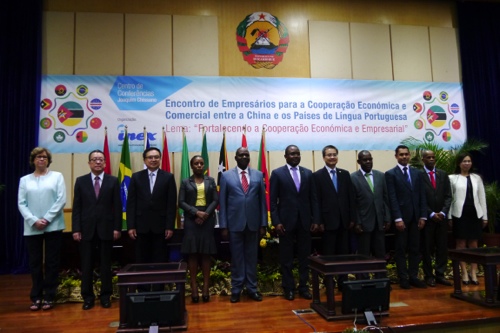 The president of the Institute for Macau Institute for Trade and Investment Promotion (IPIM) said Tuesday in Maputo, that Portuguese-
speaking countries (PLP) could strengthen their trade relations with China through food product exports.
Jackson Chang, who was speaking to Macauhub on the sidelines of the “10th Business Meeting for Trade and Economic Cooperation between China and the PLP,” said businesspeople from the Portuguese-speaking community from October onwards would be able to present their products at a meeting in Macau, which will be promoted by IPIM.
“In October, we will hold a meeting at which we intend to attract exporters from the PLP, especially in the food sector. Through this platform, businesspeople will be able to expand their businesses and seek out opportunities in the Chinese market,” he said.
During his speech at the business meeting, which is organized annually as part of the Forum for Economic and Trade Cooperation between China and the PLP (Forum Macau), established in 2003, Chang said that in previous editions the event brought together over 3,000 businesspeople, promoted around 2,600 business meetings in the areas of infrastructure, financial services and real estate, food and agricultural products, energy, tourism and trade.
“This business meeting serves precisely to seek a better balance in economic relations between China and the PLP, which is work we have to do on an ongoing basis and that is intended to improve the trade relations of the PLP with China,” he explained.
Featuring a balance of economic relations with Beijing PLP, the secretary general of Forum Macau, Chang Hexi, said that in the first half of 2014, the trade was greater than 64 billion dollars, having exceeded 131 000 million dollars in 2013, estimating that these values ​​may increase, given the agreements signed by the governments of the member countries of the Forum during the 4th Ministerial Meeting of the platform, held in Macau in November 2013.
Mozambican Prime Minister, Alberto Vaquina, who chaired the opening session of the meeting, said that the platform, “is evidence of the commitment of the countries in the joint search for solutions to improve the business climate,” and proposed, “reflection on the management model of the economies, especially with respect to policy responses and mitigation of the effects,” of the recent global economic and financial crisis.
The importance of Macau to promote business opportunities between companies in China and the PLP was highlighted by several representatives of the foreign trade agencies of Forum member-countries, as noted by the Vice President of Portugal’s Agency for Investment Trade (AICEP).
“The forum gives great visibility to companies in one of the largest countries in the world, which is China, and all within the framework of the Portuguese language, which Macau makes possible,” Pedro Ortigão Correia told Macauhub.
According to João Macaringue, president of the Mozambican Institute for Export Promotion (IPEX), which co-organised the event with Ipim and the China Council for Promotion of International Trade China (CCPIT), over 400 businesspeople from the Forum’s member countries attended the meeting. The meeting, which included a visit to the 50th Maputo International Fair (Facim), led to more than 500 business meetings focused on the financial, construction and engineering, environmental, food, agriculture , retail, medicine and health, logistics, textile, machinery and equipment, and consulting services industries.
Macaringue also announced that representatives of foreign trade agencies had agreed that the next China-
PLP business meeting will be held in Guinea-Bissau.
As well as Ipex, Ipim, CPCIC and AICEP, representatives of the Brazilian Agency for the Promotion of Exports and Investments (Apex), Cabo Verde Investment and Export Promotion Agency (CI), the Angola Chamber of Commerce and Industry (CCIA) and the Directorate for the Promotion of Private Investment in Guinea-Bissau (DPIP) also attended the meeting.  MDT/Macauhub