Protesters to demand an apology from Fong Chi Keong 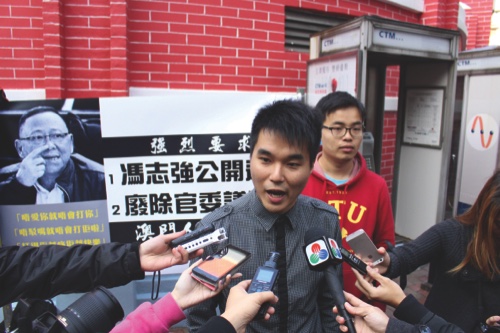 Macau Conscience is planning a march on January 24 at 3pm to demand the abolition of government appointed seats in the Legislative Assembly (AL) after the speech made last week by lawmaker Fong Chi Keong on domestic violence which caused outrage in the local community.
The group established a booth yesterday outside the Red Market to collect signatures from residents demanding an apology from Fong Chi Keong. Sulu Sou, a member of Macau Conscience, said that the “absurd comments” made by Fong have led to the co-signing of more than 6,000 residents to an open letter, which reflects the seriousness of the issue.
He said that during the January 24 march, expected to begin at Tap Seac Square, participants will be demanding Fong’s apology for his comments on domestic violence. He also hopes that the MSAR government will implement constitutional reform and abolish government appointed seats in the AL. These constitutional reforms are regarded as crucial in ensuring that lawmakers are held fully accountable to residents.
“We call on all residents who are concerned with domestic violence, who are demanding zero-tolerance against domestic violence or who are dissatisfied with the comments made by government appointed lawmakers, to come forward to give a clear message that [they] want to abolish the appointed seats”, he said.
Mr Sou said that even though Fong is entitled to enjoy freedom of speech, it does not include the freedom to incite hatred or to promote violence. “Fong’s comment was an attempt to bring back to Macau some feudalistic concepts. As a public figure and a lawmaker, regardless of what he is representing, he should clarify whether these comments reflect his personal beliefs, come from his experience, or if it was simply just a slip of the tongue,” he said, adding that the Chief Executive Chui Sai On, who originally appointed Fong, is also responsible for the incident.
During the protest on Saturday, participants will first gather at Tap Seac Square and then march to the office of Fong Chi Keong before arriving at the Nam Van Lake Nautical Centre. There may also be an assembly at the Nautical Centre, but Sou said that it depends on the number of participants.
When debating domestic violence legislation in the AL last week, Fong made several controversial comments, like: “You cannot clap with only one hand. It always takes two hands. [In cases where] the wife is chewing the husband’s ear off, if the wife did not talk back when the husband reprimanded her, the husband would not have beaten her.” He also said: “I do not understand what sexual assault is between husband and wife. There is no sexual assault in marriage.”

Lawmaker Fong Chi Keong admitted yesterday that his comment  “love you more, beat you more” is “exaggerating a little bit”. According to All About Macau, the government-appointed lawmaker stressed that he is against domestic violence, but insisted his opposition to the zero-tolerance attitude towards domestic violence.

Several residents walking past the Macau Conscience booth yesterday told the media they were angry about lawmaker Fong Chi Keong’s comments on domestic violence. Ms Ieong, a local in her 40s, said that it is a shame for Macau to have a lawmaker like him. “[Fong], as a lawmaker, should not make comments like this. What if it is the wife that abuses the husband? How do you think the husband will feel? It is not only about us ladies; men should also come forward [to participate in the protest] if they have a sense of righteousness,” she said. Another resident, Mr Leong, also said that he was unsettled by the comments due to his belief that “it is wrong to beat one’s wife”.