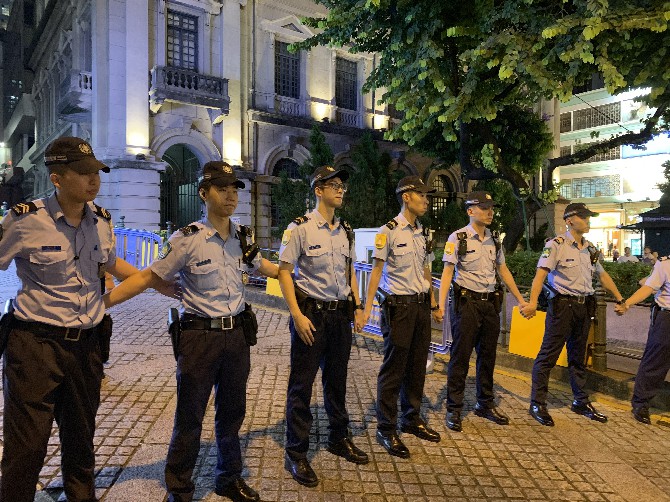 The Public Security Police Force (PSP) released a statement yesterday, reiterating that the right to assemble and protest is only given to Macau ID holders, not all people residing in the city.
The release came amid the heated dispute circulating in Macau society following an allegation that the PSP had arrested two migrant workers for hosting a protest at Rotunda do Carlos de Maia on February 21, which the PSP denied.
In the statement, the PSP expounded on the definition of “Macau resident” which is stipulated in Law No. 2/93/M — Right of Assembly and Demonstration (Law).
The PSP cited previous minutes which noted that, prior to the passage of the law, a Portuguese lawmaker suggested the beneficiaries for the entitlement of assembly and protest should be “Macau residents,” after referring to Article 45 of the Constitution of Portugal which also laid down that only Portuguese citizens are granted the right for demonstration.
A legal expert, António Katchi, said PSP has made a wrong interpretation of the law.
Katchi refuted that the term “resident” used in the law was not intended to keep out non-residents. He stressed that foreign workers are in fact residents of Macau as well, but that their status in Macau is that of foreign workers.
He also explained that the term “resident” was adopted at the time instead of “citizens,” after taking into account the fact that Macau is not a county itself.
“In my view, the government’s interpretation is totally incorrect. The rights of assembly and demonstration apply to everybody: permanent and non-permanent residents, non-resident workers and students, tourists, and visitors on a business trip. The same holds for any other civil right, unless otherwise stipulated in law and subject to the constitutionality of such law,” Katchi said in a reply to the Times last night.
“There is absolutely no law forbidding ‘non-resident’ workers (or any other category of non-Macau-ID-holders) from assembling or demonstrating. If there were such law, it would run counter the Basic Law, the International Covenant on Civil and Political Rights, and the Sino-Portuguese Joint Declaration,” he added.
Yesterday’s PSP statement also made a clarification that argues against Katchi’s points.
Pursuant to the Decree-Law No. 6/92/M before Macau’s handover to China, “the resident identity (ID) card proves that the holder is entitled with the right to be a Macau resident. Obviously, foreign workers, tourists, etc, do not have Macau resident ID cards and are not considered as a Macau resident,” the PSP said.
In addition, the PSP cited the Basic Law after the handover, stressing thats “Macau residents” are the residents of the Macau Special Administrative Regions.
There were several amendments made to the law, but there has still been none made regarding the beneficiaries of the demonstration right, the PSP said.
As a result, the PSP said that the demarcation of Macau residents has not exented to cover non-Macau residents before and after the handover.
However, Katchi said that there are several arguments supporting the idea that both the Basic Law and the law regulating the rights of assembly and demonstration, if properly interpreted, include non-residents in the protective scope of those rights.
“Over the past two decades, the government had only excluded tourists from the scope of the right to demonstrate, deliberately targeting Hong Kong democrats. It was already illegal. Now the
government goes one step further, stripping from that right a large segment of Macau’s population and an even bigger chunk of Macau’s working class,” he explained.
“This move intersects three ongoing reactionary processes: worsening of migrant workers’ status, worsening of workers’ condition (including resident workers), and curtailment of civil rights (for everybody, including residents). The right to demonstrate has been particularly targeted, in line with the Chinese Communist Party’s policy – Macau’s government can hardly disguise its intent to abolish it altogether,” the legal expert concluded.