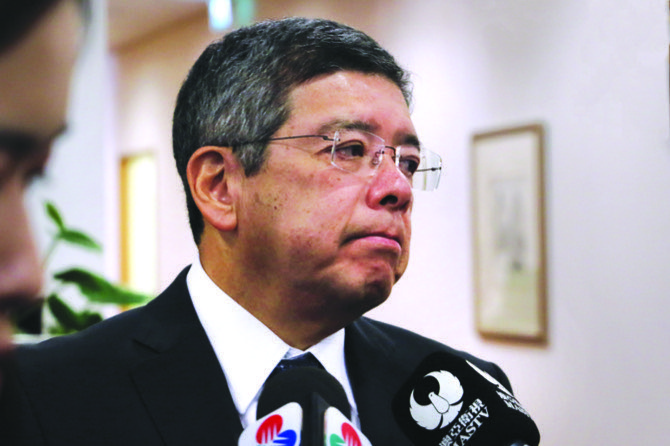 The proposal within the new affordable housing law to establish a fixed number of times that the government is required launch new tenders for public housing applicants has been considered the only major disagreement between the government and the 1st Standing Committee of the Legislative Assembly (AL) in the drafting of the bill.

This was acknowledged yesterday by both the Secretary for Transport and Public Works, Raimundo do Rosário, and the president of the committee, Ho Ion Sang after the committee meeting.

“Regarding the affordable housing [bill], there are no big differences between the government and the committee,” Rosário told media as he was exiting the meeting. “What happens is [that while] facing this great pressure and sense of urgency [from society on the topic], we have different perspectives on the way to manage this matter.”

He elaborated, “the committee would like the law to clearly state that every three to five years the government will be forced to open a tender for public housing, while we [the government] have maintained our position that this should be not included in the law. Nevertheless, we have the intention of launching such tenders on a regular basis.”

The Secretary observed that, as the government has previously noted, between the Zone A of the new landfills and the land plots of the Avenida de Wai Long, the government will have around 34,000 housing units that it will put forward for tender as the processes move forward and projects become approved.

“Maybe it could be considered that we have too conservative a position on this. I would not like to commit myself to this fixed timeline,” the Secretary said, stressing that the government does not object to the fact that tenders should be held regularly.

Questioned on why the government would reject any fixed timing requirements for tenders, Rosário said, “it’s a situation beyond my control.”

“For example, when the Chief Executive announced that in this mandate he would open a tender for affordable housing, we were working for this to be related to the project of the Avenida Wai Long. But then the issue of the environmental impact assessment arose and delayed all the processes, and so we had to swap this tender to Zone A.”

“The tender that will remain open during this mandate [of the Chief Executive] will not be for the Wai Long anymore but for the Zone A of the new landfills instead,” said the Secretary. “This is a good example of unforeseen events happening and demonstrates that these events take time to solve. And my fear is that if we accept that fixed timing – of every three, four or five years – is to be stated in the law, we might not be able to accomplish it, and in that case the government would be failing to fulfil their legal duties.”

According to Rosário, the government explained to the committee that it intends to offer tenders across a certain period of time, however it needs some flexibility to decide when it is a good time to launch a new tender.

In the summary of the meeting, lawmaker Ho confirmed what Rosário had said minutes earlier, but noted that the committee hopes the government will define a suitable frequency for the tenders.

“We hope that the government can define [the frequency of tenders],” said Ho. “In this proposal, this is not yet defined.”

Ho also said that several lawmakers had presented questions to the government in relation to the types of housing units to be built and whether they could be designed to match the needs of the population.

Ho said that the lawmakers in the committee expressed hopes that the number of small housing units can be reduced in the upcoming tenders to “avoid situations like the ones that occurred before in which a family of four was assigned to a one- bedroom unit.”

Remarking on the differences of opinion between the government and the committee, Ho explained that the government’s justifications for its aversion to having a legally mandated period for tendering mostly arise from the “evolution of the offer which is not constant,” and that establishing fixed timing could create “false expectations” among the population.

The lawmaker said that, according to the government, the next tender to open this year will be for the first phase of Zone A of the new landfills and will include a total of 4,000 housing units, of which approximately 25 percent will be one- bedroom apartments.

At the next meeting, the committee is expected to discuss the point system by which “the government should define the criteria for the point calculation such as duration of residence in the MSAR, their age and family status.”

Commenting on matters related to public housing on the sidelines of the 1st Standing Committee of the Legislative Assembly meeting yesterday morning, Secretary for Transport and Public Works, Raimundo do Rosário said that the government is more or less ready to proceed with the Wai Long public housing project.

“The Environmental Impact Assessment of Wai Long is barely concluded and although there are restrictions, as always, these restrictions are not of serious kind that prevent the utilization of the land plot for the use we wanted,” said the Secretary.
Rosário also reaffirmed that the government will build a total of 6,000 housing units in three phases on the plot, noting that the majority of these units will be built in the second and third phase of the project.

For the first phase, the construction tender for which will be open this year, there will be a small group of housing units and social and communitarian facilities. RM