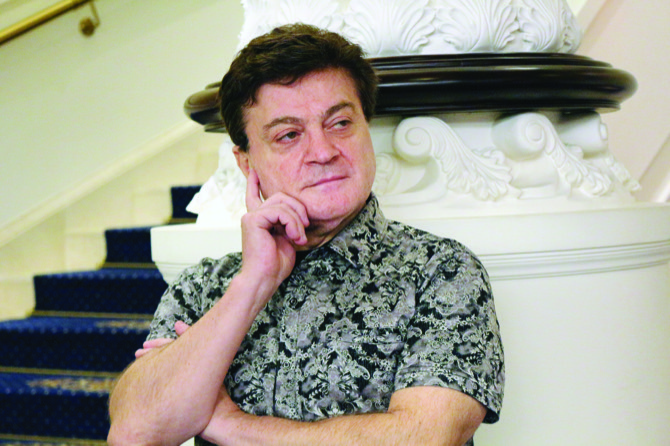 Abraham Kostanian is the artistic director behind La Parisienne Cabaret Français, a variety show at Sands China’s Parisian Macao, which this month entered its third phase after two prior extensions.

The entertaining and fast-paced show, which began its residency at the Cotai hotel in March, combines elements of dance, figure skating, graphic mapping, acrobatics, motor stunts and – of course – cabaret. The production is the 64th in the prolific Kostanian’s portfolio.

Kostanian, who retains strong links to his Armenian heritage despite never living there, was born in Syria and has worked worldwide for about 35 years. Today he is based in Berlin but has been staging productions in East Asia since the 1990s, starting initially in Singapore and Malaysia before extending his reach to Japan, Korea and China.

Following the show’s two extensions, gaming operator Sands China recently acquired the show and will be responsible for marketing it to Chinese audiences. This is exciting news for Kostanian, who wants La Parisienne Cabaret Français to become a permanent feature of the integrated resort, and views the production as integral to developing the local entertainment industry. He sat down with the Times this week to share his history of the production and where he sees it going.

MDT – Why did you decide to work on this variety show and how does a producer like yourself manage to juggle the different genres involved?

AK – I have been involved in this business for about 35 years, 25 of which I have spent in East Asia. So, I know this market very well. I know that whenever I invite artists to work with me, they will follow my direction but bring in their expertise. I love to hear everyone’s ideas, but in the end, I do my own thing. It’s my vision.

In my previous productions, we have staged many types of shows. Some of them, for example, are pure acrobatics or pure magic, or ice skating, or dance or a musical. For this show, I tried to bring in all the most attractive aspects from all my other shows to create a variety of shows. But we are continually developing this show. In every extension, we introduce new elements and changes. The times change, and we need to keep up with those changes – but the concept stays the same; it is a variety show and a family show.

MDT – You say that your Armenian identity has been a large part of your life. Has this impacted your career in any way?

AK – Yes, I see part of my job as a way to develop and support Armenian culture abroad. The Armenians have a very rich culture and history, going back almost 4,000 years. But today, Armenia doesn’t have a lot of [commodities] to sell. We are surrounded by hostile countries without a link to the sea. What we have is a service industry and our culture. And a lot of Armenians are very famous in the cultural world, for example the composer Aram Khachaturian, French-Armenian singer Charles Aznavour and pop artist Cher Sarkisian [commonly known as just Cher].

But we are a small country. There is a joke [among the overseas Armenians] that when we show people on the map where Armenia is, people remark that it is small. We say, ‘well, this is just our office.’

MDT – How do you adapt the show for Chinese audiences? Is there a language barrier for the performers, most of whom are not Chinese speakers?

AK – My consultants advised that the Chinese audience will like a very action-oriented production. If you give them a show, you cannot give them a chance to look at their watch or their smartphone. If you see anyone looking at his phone or watch – that means you failed.

Sometimes we lose a bit of the real art in order to make the show more appealing [mainstream]. There is a compromise. Because, if the gate of the culture is too high for the audience, then you’ve failed. You need to educate an audience step-by-step. In the short period we have been holding shows [at the Parisian Macao], we have seen the audience grow.

As for the language, we try to adapt to wherever we perform and use a bit of the local language.

Our audience are mostly from mainland China, but some are from Hong Kong. There is a challenging moment when deciding when to use Mandarin or Cantonese… we don’t know who the audience is exactly, so we try to use a bit of both. But mostly Mandarin.

MDT – Cabaret is not exactly known for being ‘family-friendly’, and yet this is how the show is marketed. How do you reconcile this?

AK – In the beginning, the management was hesitant to take the risk [with such a show], but cabaret is part of the Parisian culture and society. You cannot imagine a hotel Parisian without a cabaret show or the can-can. […] It’s part of their culture and life, so it makes sense to bring the show to this hotel.

In Paris, there is a different view of what makes a cabaret show. If you look at our show, you cannot say that is a cabaret show – this is a family variety show with elements of cabaret. That’s a completely different direction.

If you visit France and go to Moulin Rouge […] that is part of the Parisian nightlife culture. But I am against the idea of bringing that culture to countries where they are fighting for family shows. That is not suitable for family shows. This is why if you watch my show, we take a very soft, elegant and age-appropriate approach to the cabaret [element]. I think we have struck the balance right.

It’s about bringing cabaret as a cultural [icon] to Macau and leaving the more vulgar parts behind.

MDT – Sands China has decided to purchase the show and become more involved in marketing it to Chinese audiences. How will this partnership develop in the show’s latest extension?

AK – The marketing part and the financial part of the show have been purchased by Sands China. I retain the artistic part, but they own the production. This is the normal way [a show operates] and it is a better way, because they are also invested in the show’s success.

As an artistic director and producer, I see that the audience, once they are inside the theatre, are very happy. But I need people to handle the other side of that – people who can bring the audience to the theatre. A company like Sands China has all the resources to support us in marketing the show.

My aim is to make this show a permanent show in the Parisian Theatre. The show’s run, which is until February, will enable everyone to assess if this [collaboration] works.

MDT – Having worked extensively in Macau for around six months, what is your take on development of the local entertainment scene?

But the international show industry in Macau is still at a very low level. We need to have many theatres operating in Macau in order to develop this industry. You cannot just have a few shows; the industry will never grow like that. But this is not a secret. I don’t know why the hotel-casinos have many theatres in this city but very few shows. It’s like all of their doors are shut. I think one day the Macau government will ask them why they have theatres without shows and will encourage them to bring permanent shows to Macau.

In this [climate], you need pioneers to be the first before it can become a tradition. So, we take the challenge – be the first – and we are pleased that it is starting to take effect. […] To be the first is always very challenging, but one day people here might remember that it was an Armenian who really got things started. [laughing]