Q&A – Leong Sun Iok, Newly elected lawmaker: ‘Many people from the gaming sector supported me for the election’ 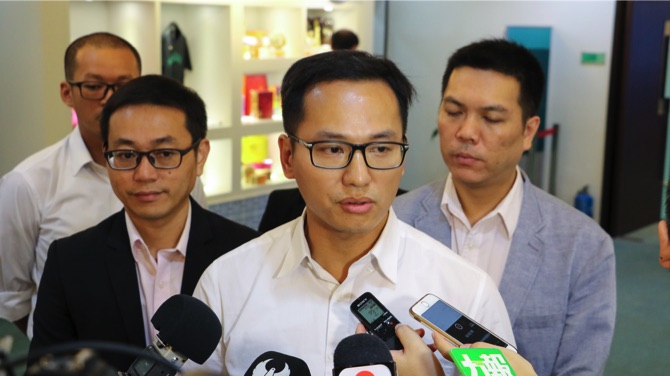 Newly elected lawmaker Leong Sun Iok is the vice president of the Executive Board of the Macau Federation of Trade Unions (FAOM) and the deputy supervisor of the Macao Lucky Gaming Operation and Training Centre.

In the last installment of a series of interviews with newly elected lawmakers, Leong emphasizes that during his involvement in trade union work, he intervened in labor disputes for the practitioners many times to fight for their pay and fringe benefits.

Leong has suggested that good jobs should be offered to Macau residents and that there should be upward social mobility for locals.

During his interview, Leong stated that Macau has faced great changes over the years, from its social development to its economy.

He hopes that additional policies can be created to train talented workers in Macau and that young people especially can have access to better jobs.

Leong explained that the Macau youth should be given opportunities to obtain training from several mainland Chinese plans and policies which involve Macau.

He looks forward to seeing casinos coordinating with all levels of society to explore ways of training talented people in human resource areas, as well as to seeing more promising positions being given to locals.

Leong’s other goals include the amendment of the Labor Relations Law, and more generous maternity leave.

In a phone call interview, Leong shared some of the elements that have paved the way for him to become a lawmaker. He also talked about the changes he wishes to bring to the Legislative Assembly (AL) and Macau residents.

Macau Daily Times (MDT) – When did you find yourself interested in participating in politics, more specifically, interested in becoming a lawmaker?

Leong Sun Iok (LSI) –  It is a little bit like a fairy tale. When I was a child, I helped the AL to hand out publicity materials. When I was still in school, I strongly wished that I could serve the society in the future. I participated in associations events when I was still studying. In 2002, or 2003, I started working for casinos, and I also joined the [Federation of] trade union hoping that I could have an opportunity to speak for the workers one day. Talking about the exact moment when I decided to run for the AL, it would be last year. And in the beginning of this year, I was voted by the members of the União Para O Desenvolvimento to represent the Union to run for the AL.

MDT – Who are your supporters?

MDT – Can you comment on the AL’s previous work?

LSI – I think that each generation has a different background, and the conditions for the AL to take action are also different. As we all noticed, this AL is formed with younger lawmakers, it is more energetic, and there are more experts and scholars who can make the AL more professional and scientific. It might benefit the development of the AL.

MDT – What are the difficulties you expect to encounter that might bar you from the fulfilment of what you said in your political platform?

LSI – The União Para O Desenvolvimento is formed by different associations, but mainly employees’ associations. Therefore, we might have a few conflicts with lawmakers from the business sector regarding some policies. For instance, the business sector currently has different opinions on some policies regarding the labor force. There might be many difficulties for us to try to fight for the employees’ benefits regarding issues involving both the employers and employees. I hope society can understand that matter because the employees do not want their employers to be unwell. Employees hope that their employers can have a healthy development, so that both parties […] can enjoy a better environment. The employees can enjoy a better work environment, and the employers benefit from a better commercial environment. In the future, I hope that I can coordinate both the parties so that they can communicate better.

MDT – What changes can you bring to the AL?

LSI – I think that one individual has limited influence over the AL. I hope that I can help the people whom I represent in gaining more benefits. I can’t say that I can do something, but I promise that I will do my job well as a way of paying back for the support of my voters. JZ