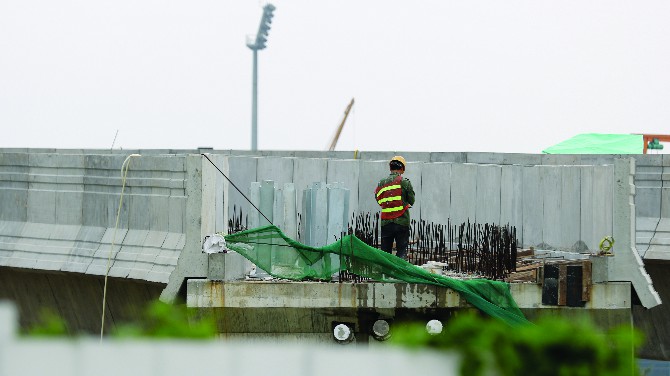 Secretary for Economy and Finance, Lei Wai Nong, has encouraged local employers to find temporary lodging in the SAR for their workers from Zhuhai, following the discovery over the weekend of Macau’s eighth case of coronavirus.
The measure, designed to reduce the risk of a further coronavirus outbreak among those commuting between the two cities, is currently being studied by the government as well as association and private entities.
However, it is still unclear how and where these employers might find the lodging capacity.
Over the weekend, Secretary Lei urged local firms with employees from Zhuhai to provide them with temporary accommodation in the city until the outbreak subsides, while non-resident workers whose work is not currently essential are advised to remain in Zhuhai for the time being.
Lei has already encouraged the Macao Chamber of Commerce and the General Chinese Foreign Worker Agency to provide their foreign workers with accommodation in the city.
At yesterday’s press conference, some journalists were concerned about the effectiveness of this recommendation. Secretary for Social Affairs and Culture Elsie Ao Ieong U addressed the matter, adding that the government “would set a deadline [to solve the lodging issue] when necessary.”
Currently, there are more than 30,000 hotel rooms in Macau. Ao Ieong acknowledged that her colleague Lei has been in close discussion with the private sector, including hotel operators, regarding the matter. However, she did not expressly mention whether hotel rooms will be used to house affected foreign workers.
Many of the affected firms during this time are in the food catering, construction, cleaning and security business, which employ a significant number of non-local workers from mainland China.
Lei said last week that there are about 35,000 non-resident workers who travel frequently between Zhuhai and Macau.
On Sunday, the top economy official announced that a Chinese employment agency is responsible for coordinating some 120,000 non-resident Chinese employees, and that the agency had already negotiated with employers to arrange appropriate measures.
Since the construction industry is most affected by this directive, Secretary for Transport and Public Works Raimundo Arrais do Rosário is set to extend construction period deadlines accordingly.
The lodging suggestion was echoed by Kou Ngon Fong, a member of the advisory council of the northern district, who urged local families to provide accommodation for their domestic helpers in case of a community outbreak of the coronavirus.
According to a report by public broadcaster TDM, Kou hopes that local families who employ domestic helpers will take them in to help prevent an outbreak of the virus within the community.
Kou explained that, in Macau, the majority of domestic helpers are living in small spaces with other roommates who are also domestic helpers. In some cases, under one roof, there can be over ten domestic helpers who work for different families living together. They travel to and from their employers’ house on a daily basis. These domestic helpers may work for different employers who could be working in casinos or other densely populated places.
In Kou’s opinion, domestic helpers face a high risk of infection. If one person becomes infected, the virus could be passed to their roommates, who in turn could pass the virus to their employers, who could then infect their coworkers, thus creating a serious community outbreak.
Kou suggested families with domestic helpers and the ability to allow them to stay with them do so, or to at least provide domestic helpers with better living conditions elsewhere.
Kou also urged the local government to create other types of publicity materials to assist senior citizens to better understand the current situation of 2019-nCoV.