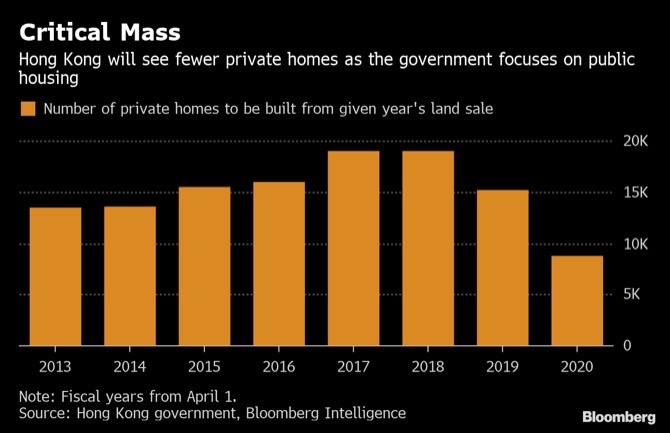 A dwindling supply of land that can accommodate private homes should help put a floor under falling Hong Kong residential property prices.

For a city in the throes of a crippling housing shortage, that may seem counter-intuitive. But the decrease in private land supply is a result of the government’s increasing focus on public housing. In December, the government announced that its land supply allocation quota for private homes would shrink from 40 percent to 30 percent.

Demand for public housing is pervasive in what has become the world’s least affordable property market. The average wait time for a government-assisted rental unit is more than double what it was in 2012, Hong Kong Housing Authority data show.

Reduced land supply for private residences won’t have an immediate effect on prices because it takes around five years for a project to come to fruition, according to Ryan Ip, the head of land and housing research at pro-government think tank Our Hong Kong Foundation. But he said over the coming three to four years, “developers will start slowing their home sales” because they’ll want to extend the roll-out period for existing projects.