Reflections from Macau | We don’t talk (enough) about Tiananmen 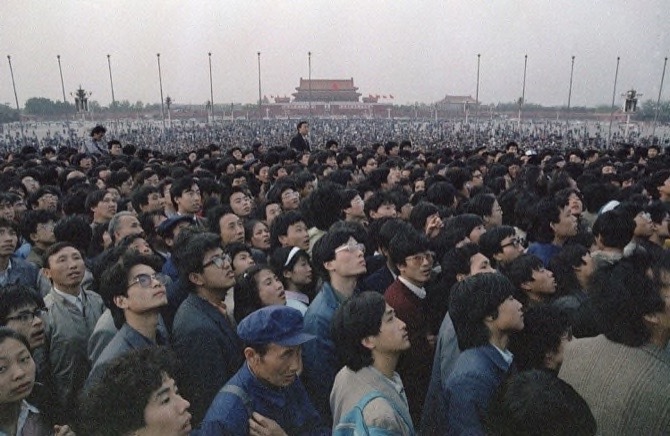 Today is the 30th anniversary of the violent crackdown that ended seven weeks of nation- wide protests calling for political reform. Remembered as the June Fourth Incident, the violence of 1989 has since become one of the most important events in the story of modern China, with its effects felt in Macau, then negotiating its return from Portugal to China, and far beyond.

The intent behind the 1989 demonstrations was not, as is often conceived, to topple the Chinese Communist Party. The demonstrators were calling for corruption to be countered, for income inequality to be redressed and for the pace of political reform to be expedited.

“China required political reforms, however, the suppression led to more and more serious corruption issues in China,” local lawmaker Au Kam San told the Times yesterday. “If it had really succeeded, in terms of democracy and rule of law, Chinese people nowadays could benefit more from the economic development, and the disparity between the poor and the rich would not be this serious.”

Instead, after seven weeks of protests, the Central Government responded with a level of violence unbefitting of the times. The whole world was shocked; the reverberations felt suddenly in places culturally close to the mainland, like Macau.

“To the Chinese people, June 4 is a milestone in the struggle against authoritarianism, bureaucratic centralization, corruption and single thinking, but at the same time a call to development and to the lessons of history,” said lawyer and political commentator Sérgio de Almeida Correia.

“For the Central Government it should be an appeal to the recognition of error and recurrence of historical truth for the greater greatness of the nation,” he added. “I believe that to this day the Central Government has not realized yet what has happened and has never made a genuine effort to do so,” he continued. “Without a process of historical reconciliation, as it was done in other countries – [for example] South Africa, Chile, Angola – it will always be an open wound.”

This weekend, China’s Defence Minister Wei Fenghe made a rare acknowledgement of the June Fourth Incident, calling it the “correct policy” for handling the “turbulence.” The language, chosen carefully, is intended to trivialize the severity of the Central Government’s reaction, but it is also revealing of Beijing’s insecurity.

That insecurity is echoed by the pro-establishment camp in Macau, who yesterday downplayed the significance of the historical event in their comments to the Times.

“I think there is nothing to be expressed regarding this matter,” said pro-establishment lawmaker Ho Ion Sang, when asked about the way the event is memorialized in Macau. “There is no need to comment. It is their personal choice to organize the vigil,” he said about the pro-democrat organizers.

Legislative Assembly peer Wu Chou Kit was equally evasive, determining that it “is difficult to judge right and wrong about a thing that has passed.”

“I don’t have much to [recall] about this event,” he told the Times yesterday. “Many people know about it; many young people also know about it. Many historical moments have already passed. How do they affect our generation? Are they good or not for us? It’s difficult to say.”

Some lawmakers contacted by the Times declined to comment, while messages sent to others went unanswered throughout the day. 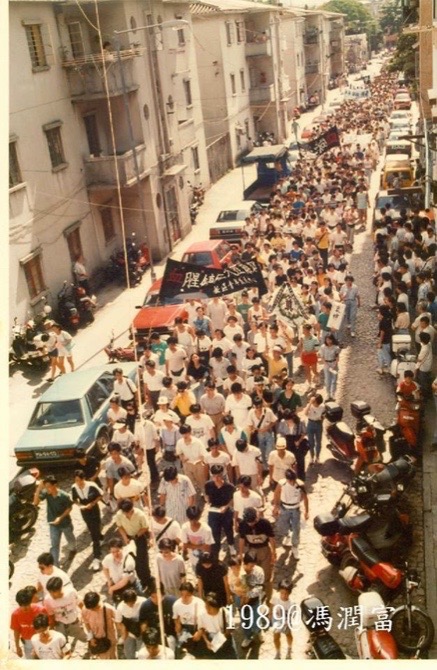 Seen by much of the world as a pivotal moment in modern Chinese history, the absence of June Fourth from the mainstream curriculum in Macau is striking. It contrasts with the historical treatment of the student-led May Fourth Movement, almost exactly 80 years earlier, which is celebrated today as a part of the nation’s identity.

“[June Fourth] is not only an important part of Chinese history, but also an important part of human history,” said lawmaker and democracy advocate Sulu Sou. “It had a great influence on the entire world, especially the communist world in the 1980s, where it bloomed in Eastern Europe.”

But the events of Tiananmen Square in 1989 are not widely remembered in Macau. That is evident from the reactions of the youth who pass by the Senado Square vigil each year and, interviewed by the Times, admit they know little or nothing about the incident.

For some, the lack of familiarity with the event starts with how the subject is treated in the classroom.

“How can you teach Chinese contemporary history by jumping from the sacking of Hu Yaobang in 1987 to the Southern tour of Deng Xiaoping in January 1992?” posed Sautedé, when asked about the importance of teaching the June Fourth Incident. “History is very badly taught in Macau. The biggest patriotic schools would never venture into that topic, and […] if you look at the new textbook on Chinese history that was released last year, June 4 is completely absent.”

Former educator Au, who has held his seat at the Legislative Assembly since 2001, said that the latest generation of history textbooks to be circulated in Macau schools have no mention of June Fourth. “In pro-government schools and in Catholic schools it is not mentioned that much,” he said, however, “I know that many educators [in other schools], during their lecturing, will mention it to the students.”

Sou said that many young people are familiar with the June Fourth Incident, despite a glossing over of the material in schools, because of the accessibility of information online. “When I was in school, it was mentioned because we were using textbooks from Hong Kong,” said Sou, who is now in his late twenties. The lawmaker added that he understands mention of the event is becoming scarcer today.

“People in their 30s or younger may know less as they didn’t experience it,” agreed Au, “but Macau has freely-accessible information – if people are willing to, they can find a lot on the internet.”

“It is important to remember that Macau was not always as complacent as it is today,” said Sautedé.

The political commentator stresses that the older generation will remember the extent of the mobilization of demonstrators that occurred in Macau three decades ago, when approximately 100,000 people crowded the Ruins of St. Paul’s to protest a crackdown some 2,000 kilometers away.

Veteran journalist Severo Portela, who at the time covered the rapidly unfolding events for the public broadcaster, recalled “two or three events that changed hearts: the 100-to-200 thousand-
strong demonstration in the stairs and around the iconic St. Paul’s Ruins under a heavy downpour; the public fall and demise of the editor of an influential Chinese-language daily, crying and apologizing for a front page empty of the fresh massacre and the starting point of the empowerment of those that were shyly printed as ‘liberals’, who were to swallow the legislative elections with half the directly elected legislators.”

How did such a vocal generation fall silent in the years that followed?

For Sou, although the events of 1989 “tremendously influenced that generation” and “started a wave of democracy in Macau,” these very people have learned to “keep it to themselves and not share with other people.”

“Nowadays, society is different,” added Au in agreement. “Some people may not express their opinion, but they keep it to themselves.

“What is disturbing is that what happened on June 4 remains hidden and silent,” said Correia. “In Hong Kong and Macau, once a place to shelter and welcome those who needed it, few people know the recent history of the country. There are young people who do not know even the past before 1997 and 1999 and the inheritance of other administrations. They think everything has always been like this. Ignorance helps keep silence.” 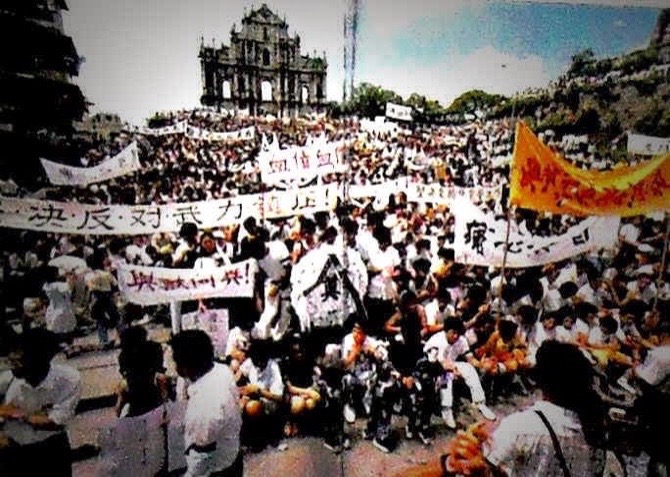 THE DAY OF THE LAST VIGIL

A government eager to wipe an inconvenient event from the record. A directive for unwavering patriotic education to be instilled among Macau youth. A climate of willful ignorance. Under such conditions, it is not unimaginable that one day – by whatever reason or excuse – the annual Senado Square vigil held to memorialize the events of June Fourth might be disallowed.

“It is difficult to say whether it will one day be forbidden,” said Sautedé. “It has already been restrained. For many years, the vigil had to take place in front of Saint Dominic church instead of near the fountain in Senado Square, as there was always a competing event being held there — for youth day — that was always deemed more important. That changed again in 2014.”

“It is not impossible that the vigil may be banned one day as the political situation changes,” admitted lawmaker Sou. “It is difficult to foresee these things.”

Fellow democrat Au said he believes the annual memorial will continue to have a place in Macau so long as the ‘one country, two systems’ policy endures.

Correia agrees. “The day people are prevented from honoring the memory of those who perished in Tiananmen, the ‘second system’ will be no more than a footnote in the history books,” he said.

This year, the vigil will go ahead in its usual location – next to the fountain in Senado Square – where it is being held for the 29th consecutive occurrence. Lawmakers Au and Ng Kuok Cheong will lead a candlelight vigil starting from 8 p.m.

As in previous years, the two lawmakers will share their thoughts and memories of the incident, before inviting participants to share their own thoughts. An exhibition of photographs, articles, and news clippings connected to the incident will be displayed next to the vigil.

“The vigil is meaningful; it is a ritual, a platform,” said Sou, who is expected to attend. “A ritual may not change that much, but each year, people gather and discuss it and the future. I think this is a very meaningful activity.” Daniel Beitler & staff reporters 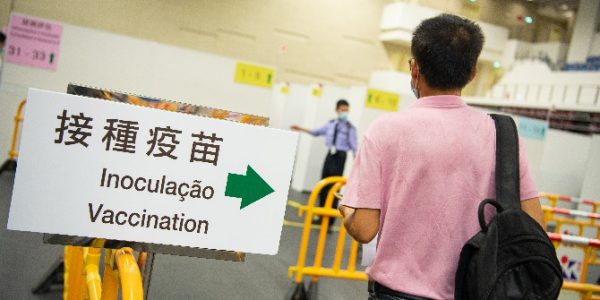