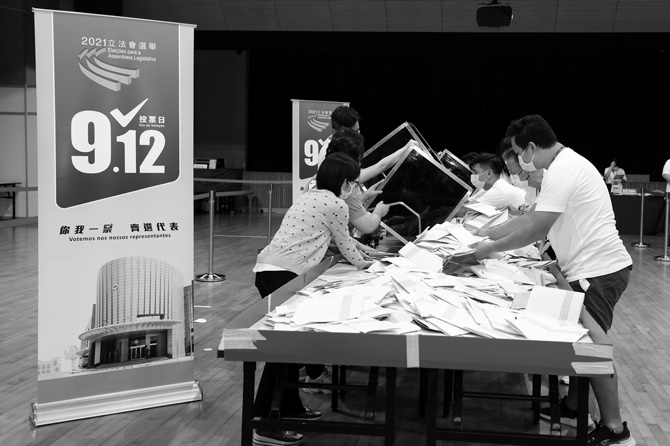 The city’s anti-corruption watchdog has received 712 complaints or reports in 2021, of which 179 related to elections.

The reported figure is nearly double the number received in 2020, when a total of 479 complaints and reports were recorded.

Upon collating and consolidating the complaints or reports with the same objectives, the cases which met the conditions for filing were sent to the Anti-Corruption Bureau and the Ombudsman Bureau for follow-up work, with a total of 119 and 226 respectively, the Commission Against Corruption said in a statement yesterday.

In addition, a total of 310 cases that did not meet the conditions to be filed were archived or transferred to other departments for handling.

Meanwhile, in 2021, upon completion of the elections, a total of 13,089 inspections were carried out and 28 investigation files were opened, including four investigation files and two minor infringement files. Summaries of some of the cases have been included in the report.

As to combating corruption, the CCAC apprehended a former leader of the former Land, Public Works and Transport Bureau (currently the Land and Urban Construction Bureau) who had been living on the Chinese mainland for a long time. They also detected multiple cases involving occupational crimes and disciplinary offences committed by public servants, as well as cases involving bribery in the private sector.

In addition, in 2021, there was a decrease in cases involving fraud over various public funds compared with previous years, proving the effectiveness of the forceful crackdowns on fraud over public money.

As regards action by the ombudsman, a number of cases with the same or similar objectives were consolidated and handled together by the CCAC and a comprehensive investigation mechanism was adopted.

“As a result, there was a decrease in case backlogs and the CCAC was also able to collate and analyze the facts found in some cases, which enabled it to give suggestions to the departments or administrative bodies concerned in a unified way,”the bureau stated.

The corruption watchdog said it has found that many complaints stemmed from a lack of communication and inadequate information transparency, and it therefore suggested that the relevant departments or administrative bodies strengthen communication with residents.

The Annual Report has been submitted to the Chief Executive, Ho Iat Seng, in accordance with the Organic Law of the Commission Against Corruption of the SAR. LV