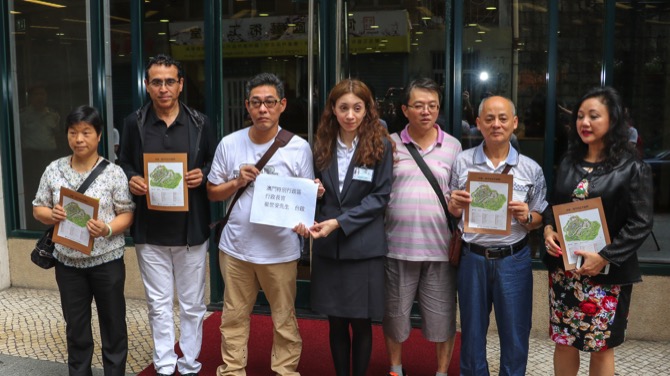 The Macau Civil Servants Association (ATFPM) yesterday led a group of local residents who bought properties in Zhuhai to deliver a letter to the Chief Executive (CE), Chui Sai On, urging him to make “use of his political influence and formal means” to solve the problems surrounding property purchases in the neighboring city.
The letter, delivered to the MSAR government headquarters, has been written in the name of over 200 pre-sales buyers of properties in the “Hill Beyond the Sea Condominium,” located in Zhuhai.
In the letter, the buyers claim that back in 2012-2013, the development promoter advertised the condominium as a luxury venue with several facilities, such as a private club and a private forest park with a total area of 150,000 square meters.
In 2014, when the residential units were completed, the property owners discovered that the advertised facilities did not exist and that the promoter had sold the land at the entrance of the condominium to another developer to build a private kindergarten that will block the entrance and access to the condominium.
As the president of AFTPM, José Pereira Coutinho said “with the construction of the kindergarten facility the access to the condominium will be blocked and people will have to find a different way to access their residences,” adding, “there have been a lot of changes to the original project, which means that buyers’ investments are being affected.”
The lawmaker hopes that the MSAR government can take the topic to the “biannual and annual meetings between Macau, Zhuhai and Guangzhou areas, which sees the meeting of dozens of representatives across several public services in those areas.”
The ATFPM president stressed that the government must be aware of “the investments that Macau people make, namely in the real estate sector, due to their lack of financial capacity to buy a house in Macau” urging the government to find “some kind of protection mechanism of the rights of these consumers.”