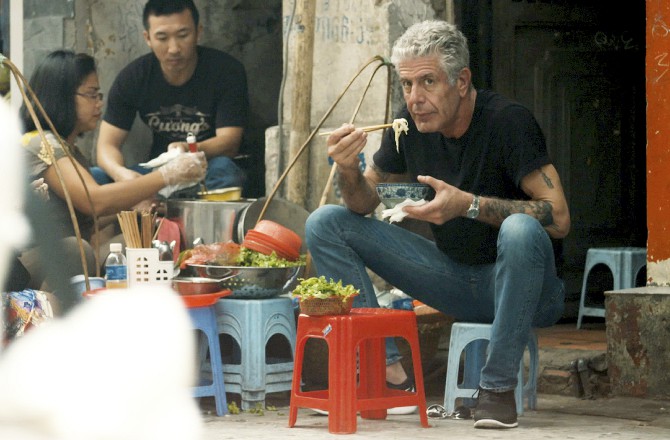 There are many startling moments in “Roadrunner,” Morgan Neville’s rich and moving documentary about the singular culinary storyteller Anthony Bourdain, who tragically took his life at the age of 61.
Here’s just one that sticks out: a quick scene with a therapist, in Argentina. As Bourdain lies on her couch, cameras rolling for an episode of his show, he describes some frightening psychological urges he has. She asks him if he wants to change, and to feel differently. He replies: “I suspect it’s too late.”
We never learn here why Bourdain wanted to film what seems a genuine therapy session. But it fits in perfectly with the portrait Neville paints of a man who couldn’t resist being anything but painfully honest, and painfully public, even when it took him down some dark paths.
It’s also an example of just how much material Neville had to work with. Between Bourdain’s own recordings and voiceovers, copious footage — much never seen — from production of his TV travelogues, and countless home movies and photos, it comes to feel like Bourdain himself is narrating his life story. And it’s hard to shake the feeling he already knows what happens, especially when he quips early on: “Here’s a little pre-emptive truth-telling: there’s no happy ending.”
Neville dispenses quickly with the early stuff — Bourdain dropping out of college, washing dishes in Cape Cod — even his years as chef at Manhattan’s Brasserie Les Halles. It really starts at age 44, when “Kitchen Confidential,” his wickedly funny memoir about the underbelly of the restaurant world, catapults him into stardom and a life as a globetrotting raconteur bold enough to swallow a still-beating cobra heart or a sheep’s testicle.
The transformation is dizzying: People are shouting to Bourdain in the streets. He’s sitting down with Letterman, and with Oprah. They’re saying Brad Pitt wants to play him. “It was like he died and was reborn,” says his brother, Chris Bourdain.
The final act of “Roadrunner” is infused with a feeling of dread. Bourdain had become involved with Italian actor Asia Argento, a key accuser of Harvey Weinstein. She directed an episode of his “Parts Unknown” in Hong Kong, and we literally watch Bourdain falling in love. We also hear how devastated he was when a tabloid published pictures of her with another man, shortly before his death during filming in eastern France.
It’s clear that some of Bourdain’s co-workers felt the relationship with Argento sent Bourdain into a tailspin that led to his death — even though one of them points out, rightly of course, that “Tony did this.” It’s unfortunate that the film does not include Argento’s own voice here.
But one cannot fault “Roadrunner” for not coming up with clear answers. There rarely are clear answers, anyway, and this film seems to want to be about a life, not a death. A fascinating life, parts of which will forever remain unknown.