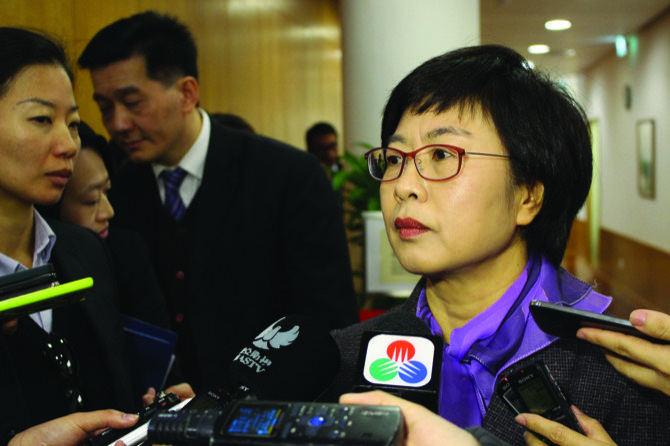 Macau and Beijing justice authorities have reached a “consensus” regarding the transfer of convicted criminals, the Secretariat for Administration and Justice announced.

Secretary for Administration and Justice Sonia Chan led a local delegation to Beijing to discuss the possible extradition of convicts, following a suggestion from Hong Kong authorities that would allow extraditions to Macau, Taiwan and mainland China on a case- by-case basis.

According to a statement issued by the Secretary’s office, the visit was “successful” and had achieved the results that both parties were hoping for. The two parties are set to study the different legal regimes and have said to have already created a contact mechanism for checking on progress.

During the meting, the two officials exchanged views on the transfer of sentenced convicts between the two regions. Chan’s office noted that “mutual efforts will be made to boost and deepen bilateral judicial cooperation.”

The office also said that both parties would undertake mutual efforts to deepen judicial cooperation and legal exchanges.

Meanwhile, representatives of the Chinese Department of International Cooperation and the Correctional Services of the Ministry of Justice also held a meeting with the local delegation regarding the legal arrangements for the transfer of convicted felons.

During the visit, held between February 25 and 28, the delegation studied how to introduce electronic judicial citations and notifications, as well as to create a cooperation platform for the courts of both the mainland and the Macau SAR.

Macau currently has agreements for the transfer of convicted criminals with Hong Kong, Portugal, Mongolia and Nigeria. Plans are already in place to develop similar agreements with Vietnam, Malaysia and the Philippines. LV