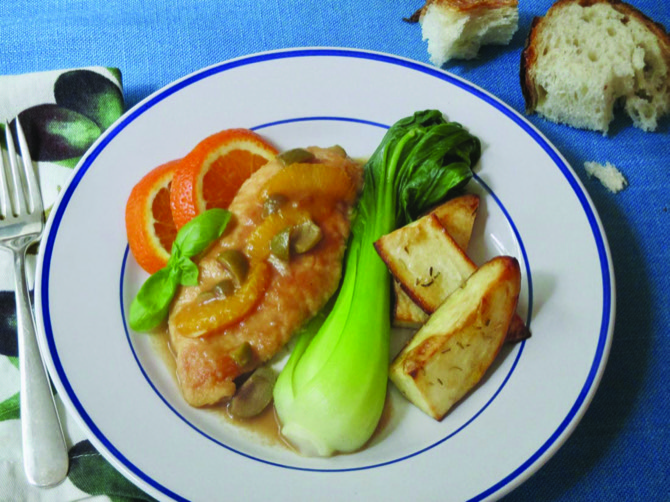 Now that my kids are on their own and cooking for themselves, both have thanked me for passing on one technique in particular: how to cook a thin piece of protein and make a pan sauce from the drippings. It is indeed a quick, easy and affordable skill with endless variations. It also guarantees a deeply delicious entree. Consider this recipe — chicken cutlets topped with a tart orange sauce — the template for the technique.

Whenever you use it, you have to start with a thin piece of protein to ensure that it cooks quickly and evenly. Here I’ve chosen thinly sliced chicken cutlets. If the only breasts available at your supermarket are large and thick, bring them home, pop them in the freezer for 30 to 40 minutes (which firms them up) and then, very carefully, slice them in half width-wise to produce two thinner cutlets. If you’d prefer pork to chicken, just buy half-inch-thick boneless pork chops and trim off any excess fat.

Before sauteing the meat, you’ll need to dredge it in flour. This step prevents the meat from drying out by coating and insulating it. (Both chicken breasts and boneless pork chops are very lean.) It also serves to thicken the sauce when the protein is added back to the pan. My flour of choice is Wondra, a venerable brand favored by my grandmother that was magically designed not to lump up in gravy. It also produces a nice light coating for the cutlets.

After you’ve browned the cutlets in a little oil and moved them onto a plate, there’ll be some concentrated juices sitting on the bottom of the pan. To deglaze the pan and dilute the brown bits, you’ll need to add liquid, usually something acidic. Wine is traditional, but a little vinegar and/or citrus can also do the job. Here I call for sherry vinegar, but balsamic, red, white, or cider vinegar would be fine, too.

Next you’ll add some chicken broth, then reduce the liquid a bit before returning the cutlets to the pan to finish cooking them gently as the flour coating thickens the sauce. The last touch? Add some butter to enrich and thicken the sauce a trifle further. That’s it. You’ve landed a delicious entree on the table in just 30 minutes. Sara Moulton, Celebrity Chef via AP

HOW TO COOK IT

Spread out the flour on a piece of parchment on the counter. In a large, nonstick skillet heat the oil in a large skillet over medium-high heat. Season the cutlets on both sides with salt and pepper and coat them with the flour, shaking off the excess before adding them to the skillet. Reduce the heat to medium and cook the chicken until lightly golden, about 2 minutes per side. Transfer the chicken to a plate.

Add the orange juice and sherry vinegar to the skillet and simmer until reduced by half, scraping up the brown bits in the bottom of the pan. Add the chicken broth and olives and bring the liquid to a boil. Reduce the heat and simmer for a few minutes. Return the chicken to the pan, along with the orange segments and any juices from the plate and simmer very gently, turning the chicken over several times, for 2 to 3 minutes until it is just cooked through. Do not let the liquid boil.

Transfer the chicken to 4 plates and simmer the sauce until it has thickened. Add butter to the skillet and swirl the pan just until the butter is incorporated. Add salt and pepper to taste and spoon the sauce over the chicken.