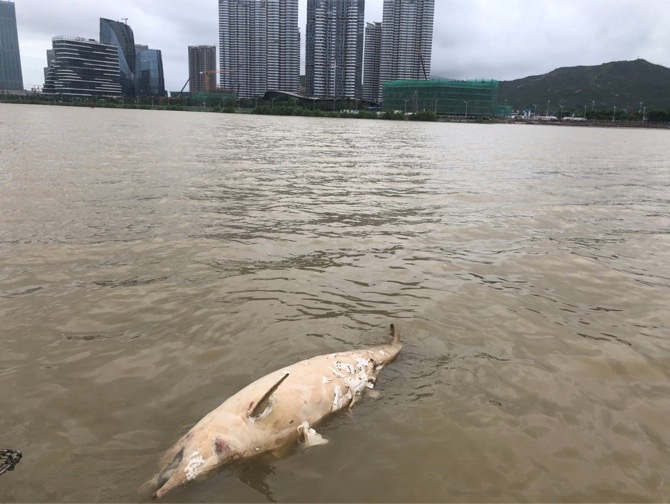 Yesterday morning, another body of a dolphin, this time a Chinese white dolphin, was found in Macau waters, according to a statement released by the Marine and Water Bureau, following another of the species found washed ashore on Saturday. The cause for their deaths remains unknown.

The dolphin corpse was spotted in the water in front of the Ocean Garden residential complex. The marine authority informed the Municipal Affairs Bureau and a cleaning company came to attend the scene and handle the dolphin’s corpse.

The case was also reported to the Environmental Protection Bureau (DSPA).

Earlier, on June 29, a dolphin corpse was discovered by the marine authority on Hac Sa Beach.

Since the construction of the Hong Kong-Zhuhai-Macau Bridge began in 2009, the appearance of dead dolphins in Macau waters has reportedly become more frequent.

Regarding all the aforementioned cases, the Macau government has never explained whether the deaths were caused because of environmental pollution associated with the HKZMB.

The situation is more serious in Hong Kong. In 2011, Hong Kong section of the HKZMB construction began. In the years since, the population of Chinese white dolphins in Hong Kong’s waters more than halved, from 100 to 47 in 2017.

From 2009 to October 2018, at least 84 white dolphin corpses were found stranded in Hong Kong. Among them, 15 had died during the peak of the HKZMB construction in 2015.

According to statistics by the Agriculture, Fisheries and Conservation Department of Hong Kong, the number of Chinese white dolphins stranded between 2000 and 2009 was 102.