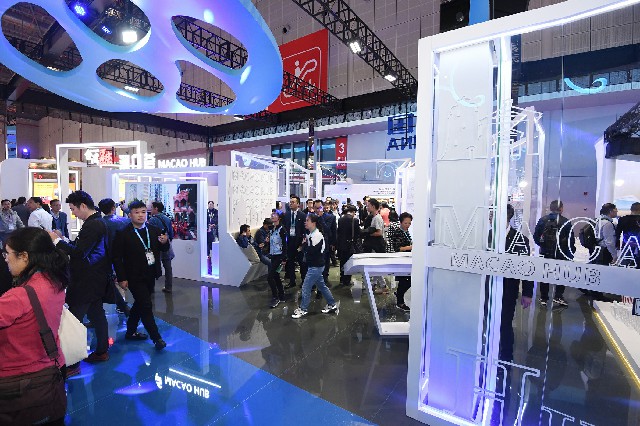 Macao Hub exhibition area, organised by the MSAR, is set up within the China Pavilion at the China International Import Expo in Shanghai

The active participation of Macau enterprises in the 2nd China International Import Expo (CIIE) “illustrates the Shanghai event is effective in promoting their business,” said the Secretary for Economy and Finance, Lionel Leong, yesterday.
Leong was speaking to reporters in Shanghai during his visit to the exhibition area organized by the Macao Trade and Investment Promotion Institute (IPIM), and to booths of local enterprises. The IPIM exhibition area is in the “Trade in Goods – Foods and Agricultural Products Zone” of CIIE.
Leong added that CIIE provided Macau businesses with “fresh opportunities” to reach out internationally, and to participate in the fast-track growth of the country’s economy.
As a commercial and trade cooperation service platform between China and the Lusophone world, “Macau was stepping up effort to introduce a greater number of products from Portuguese-speaking countries to the mainland, in order to serve the need for quality products in that market,” said the secretary as quoted by the Government Information Bureau in a press release.
Secretary Leong noted that not only did Macau companies which trade in goods participate in the Expo, but also some local banks that provide financial services for buyers and purchasers. “This demonstrated Macau’s industrial ecosystem was gradually taking shape,” added Leong.
He went on to say that the IPIM exhibition area at this year’s CIIE was larger than in the previous year’s edition. Leong also noted there had been more than 600 trade negotiation sessions arranged this year. This year’s uptake showed the Macau business sector’s recognition of the effectiveness of last year’s CIIE.

Delegation of over
100 businesspeople
The Macau delegation is composed of over 100 businesspeople who have travelled to Shanghai to attend the 2nd CIIE, held from November 4 to 7, IPIM said.
The trade institute, in addition to setting up two pavilions, also organized a forum to present and promote Macau’s advantages as a platform for cooperation between China and Portuguese-speaking countries through a variety of interactive and diverse methods.
Leveraging on the positive outcome of the first CIIE, IPIM once again organized a business delegation to participate in the exhibition, which includes representatives from different sectors including trade, financial services, conventions and exhibitions, e-commerce, science and technology, food, hospitality, tourism, catering, manufacturing, and professional services.
IPIM set up pavilions in the Food and Agricultural Exhibition Area and the Services Trade Exhibition Zone. It was attended by Macau companies which produce goods, supply food and beverages from Portuguese-speaking countries, and provide accounting and translation services.
Yesterday, Macau hosted the “Macau Cooperation and Investment Forum – Service Platform for Trade Cooperation between China and Portuguese-Speaking Countries,” jointly organized by IPIM, the Hong Kong and Macao Affairs Office, the Shanghai People’s Government and the Permanent Secretariat of the Forum for Economic and Trade Cooperation between China and the Portuguese-speaking countries (Macao).
This seminar aims to introduce participants from around the world to Macau’s positioning and advantages as a platform for trade cooperation services between China and Portuguese-speaking countries. MDT/MacauHub

Clothing by Macau designers will tour the Yangtze River Delta under a cooperation agreement signed yesterday during the China International Import Expo, shine.cn reported.
The designers will take their creations to Jiangsu and Zhejiang provinces for exhibitions between November 28 and 30 and will be introduced to enterprises based there.
Lu Pingyi, director of the International Fashion Idea Display and Trade Center, said that when it heard that Macau’s clothing association — with which it had a good relationship — was attending the second CIIE, they saw a good chance to further exchanges and collaboration in more areas of the Yangtze River Delta region.
Tomorrow, the center will sign agreements with French fashion associations, which will establish an office in Shanghai in the future and bring high-quality fashion resources to China. It is also working on getting fashion resources from Japan and South Korea.
According to shine.cn, Li Xiuqiong, general manager of the Macau Clothing Brands Incubation Platform, said he hoped through international exhibitions to integrate with the world market and improve the image of Macau fashion throughout the world, as well as enhancing overseas exchange.