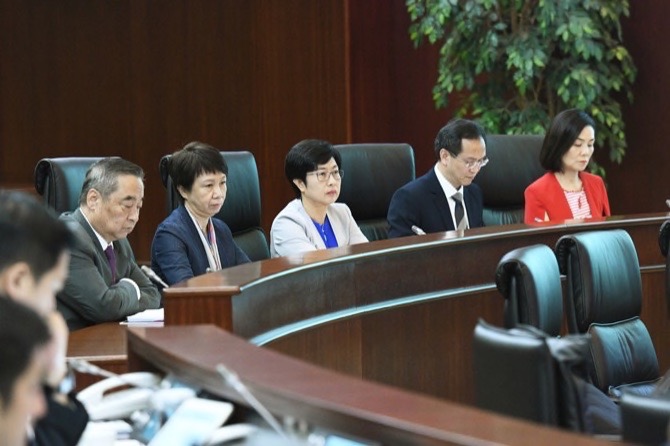 Secretary for Administration and Justice Sonia Chan appeared to back herself into a corner yesterday at the Legislative Assembly (AL), claiming that Macau would not advance with democratic reform, and yet describing the city’s Chief Executive elections as “democratic and representative” because of the expansion of the electorate from 300 to 400.

Lawmaker Au Kam San asked Chan if Macau’s political reform should be first proposed by the Macau government, and, in particular, by the Chief Executive, instead of being proposed by the Central Government.

Au urged the local government to initiate political reform to achieve universal suffrage for the Chief Executive and AL elections.

Chan avoided answering all of Au’s questions. In turn, she presented her own figures, claiming that Macau’s election has been more representative and more democratic because there are now 400 members in the election committee of the CE election compared to the previous 300.

“The members are spread across all sectors and balance the interests of all sectors and all classes. It has increased the involvement of democracy,” said Chan, adding that “the total voting turnout of this year’s election of members to the election committee reached 87.2%, 4.5% more than in the previous election. It shows the legitimacy of the election.”

Chan also mentioned that, in the previous round of reform, “the Chief Executive submitted a report” to the central government for approval of the political reform.

Having heard Chan’s reply, Au said “I really want to thank you for your reply, but I don’t know how to thank you because you didn’t even answer my questions.”

Au elaborated, “apparently, all political reforms start from the Macau SAR government. How can you say it is the Central Government?”

Once again, Chan evaded Au’s question, saying, “we can’t say if a constitution is good or bad; the most important is that is suits the place and is endorsed by the society.”

“You never answered us regarding whether the first step should be the Macau Chief Executive submitting a report to the central government,” said lawmaker Sulu Sou, who indicated that Chan had contradicted herself by saying that the authorization lies with the Central Government.

“You are lying to yourself,” added Sou. “Around 5,000 people vote for members of the election committee, and then the vote rate is 87 percent, and you think the vote rate is very high and the society highly endorses the vote.”

“You are lying to yourself,” he repeated. “Macau’s election is an election where you know the result without the election happening. […] Don’t you know who will become the Chief Executive? Are you creating a big show and cheating yourself?”

Chan responded that, as the CE election is set to occur on August 25, the “government is currently making every effort to support the development of the tasks of the Chief Executive Electoral Affairs Committee, ensuring that the appointment of the new Chief Executive will be fair, impartial, open and fair.”

In a statement later released on the government’s media portal, Secretary for Administration and Justice, Sonia Chan, said that the government had no plans for electing the Chief Executive through universal suffrage, nor does it plan to increase the number of directly elected lawmakers.

“In practical terms, the current electoral regime for the election of the Chief Executive and the elections for the AL have shown that it could adapt to the current level of development of society and the concrete situation of Macao, obtaining confirmation and recognition of the various sectors of Macau society,” Chan said, according to the government statement.

Meanwhile, besides not directly answering many other questions during yesterday’s session at the Legislative Assembly, Sonia Chan also evaded replying to Pereira Coutinho, who accused the Secretariat for Administration and Justice of having double standards regarding mistakes committed by junior civil servants and high-ranking government officials.

“For a long period, many elementary civil servants were given no chance to correct their mistakes, and have either been dismissed or not renewed for employment because they made a small mistake. The punishment is very strict,” said Coutinho. “However, when major officials make mistakes, they are tolerated over and over again.”

Coutinho, a directly-elected lawmaker who finds his support base in civil servants, also pointed out that the government had spent a lot of money providing training to public officials, and yet “the training seems to have produced no effect.”

Chan replied with some general information related to Coutinho’s question, however she did not directly answer the questions.

“If an ordinary resident does not know he cannot park at a place, but still parks there, can he be exempted from the fine if he claims ignorance? No, he cannot be exempted,” Coutinho added. “How can we accept such an irresponsible government?”

In her reply, Chan stated that there is no guarantee that training will be effective for every participant. According to the Secretary, currently, the local government invites judges and prosecutors to train civil servants in legal matters.

Lawmaker Wong Kit Cheng expressed her doubts about the reality of employers paying for their domestic helpers’ trips back to their home country.

She has particular concerns that once the city’s new non-local workers employment law comes into effect, the number of domestic helpers will decrease and their salary will increase, which “has a great influence over working parents.”

“We can increase the salary. But it seems the government has not accepted the employers’ opinions regarding their [the domestic helpers’] skills, yet, their salaries have been adjusted constantly,” said Wong.

“[Salary increase] grants the employees a protection, which is right. But can you [the government] understand, in respect to employers, that since they [domestic helpers] did not even come from their home town to Macau, why then, when they return to their home town, employers must pay for their return fare?’ Wong questioned. JZ