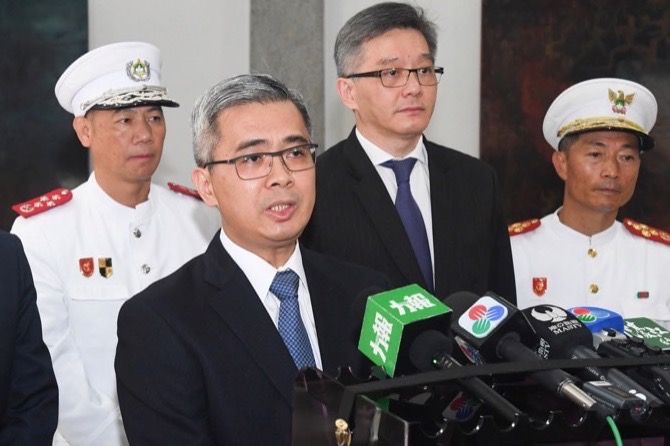 Secretary for Security Wong Sio Chak has pledged that the authorities will strive to leave no grey areas in the proposed Civil Protection Law that could lead to interpretations that limit freedom of expression. The Secretary made the comment after widespread concerns were aired about several parts of the bill, most notably article 25.

The bill previously described a new crime of social alarm, which it now defines as “a crime against safety, order and public peace during sudden incidents of a public nature.”

The bill is being considered in detail by the First Standing Committee of the Legislative Assembly.

Speaking to the press yesterday, Wong said that rumors are likely to have a large impact, causing more panic amongst the public than the disaster itself.

The Macau Portuguese and English Press Association has previously criticized the law, noting that its concern comes from the vague and subjective nature of the expressions and concepts used.

The association expressed its confusion, considering that the phrasing “biased, unfounded and fake news” was never discussed during the public consultation phase.

The Macau Journalists’ Association and the New Macau Association have also called for a review of the bill.

However, Wong said that the comments were made with a lack of legal knowledge, adding that the Penal Code and Civil Protection Law are different.

“If you have any legal sense, the Penal Code is a different situation. […] It means if I call the firefighters to say there is a fire [when there is not] and cause authorities to make unnecessary efforts, that’s the difference with the Civil Protection Law,” he said.

Wong said that the committee had sent a total of 13 questions to his office and that they were responded to by Tuesday.

He also downplayed the idea – which was suggested by lawmakers and the New Macau Association – that a revision of the Penal Code should be undertaken instead, rather than creating the rumor offence in the new bill.

The secretary also emphasized that amending the rumor crime within the Penal Code would change the entire criminal penalty structure in the SAR, thus causing changes to the city’s criminal policy.

He explained that the Civil Protection Law will only be used in emergency situations, contrary to the Penal Code which is enforced at all times.

Meanwhile, the secretary admitted that the bill still has room for improvement before it enters the final phase of the legislation.

“I’m not saying we are perfect, but we do everything so that when the law is being enforced there are no grey areas. Of course, when the AL presents some opinions, in some situations they might not understand the judicial system,” he added.

Wong also stressed that the crime only applies to the spreading of rumors with intent to harm. LV